During the years between World Wars, under the leadership of Ministers Soga, Itakura, and Yamanaka, the Hakalau Jodo Mission continued to grow and support the community through the Japanese Language School and Church. In the 1920's, Japanese language schools across the Territory came under attack in during a surge of "America First" mentality that began during World War I. This started with the Federal Commission on Education noting that Hawaii had 163 Japanese language schools educating nearly 20,000 students. The sentiment among haoles in the early 1920's was that such education was detrimental to the health of Nisei children and their progress in American schools was retarded and their loyalty to the United States was confused and neglected.  Japanese immigrants felt that continuation of the Japanese language schools was essential:
A compromise position between the Federal Commission’s recommendations and the concerns of the Japanese community was the Irwin Bill (1920) which required that language school teachers receive a permit from the Department of Public Instruction and pledge to teach nothing which would contradict American ideals or institutions. Over the next few years, a tax and additional restrictions were placed on Japanese language schools. Finally, Frederick Kinzaburo Makino, editor of the Hawaii Hochi, contested the language school control bill in the courts...and won:

​1920-1921: A period of maintenance for the Hakalau Jodo Mission Under Minister Soga Tetsuzui

The new building for the Japanese Language School was erected in 1927. 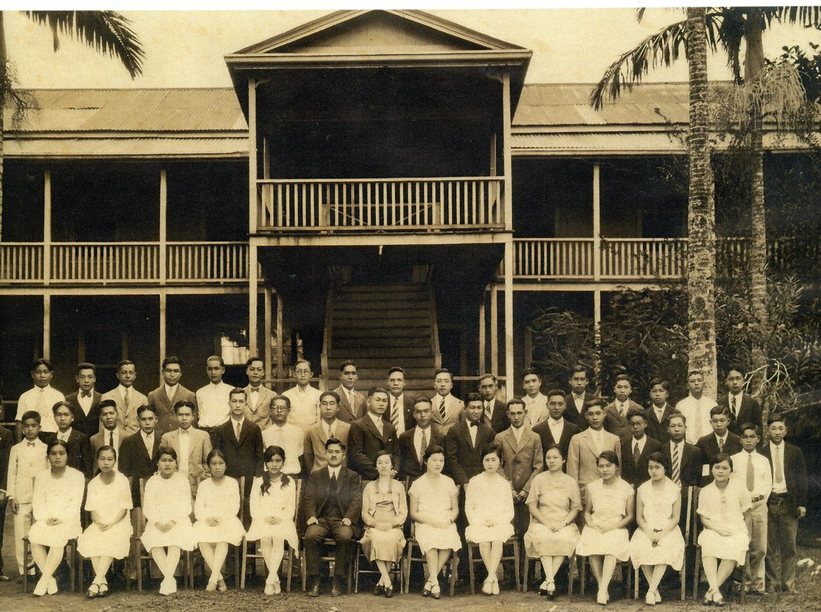 1929-1937: The Current Mission including the Temple, Social Hall and Parsonage Built to Replace the Wooden Church and Japanese Language School Under Minister Yamanaka Ryokai 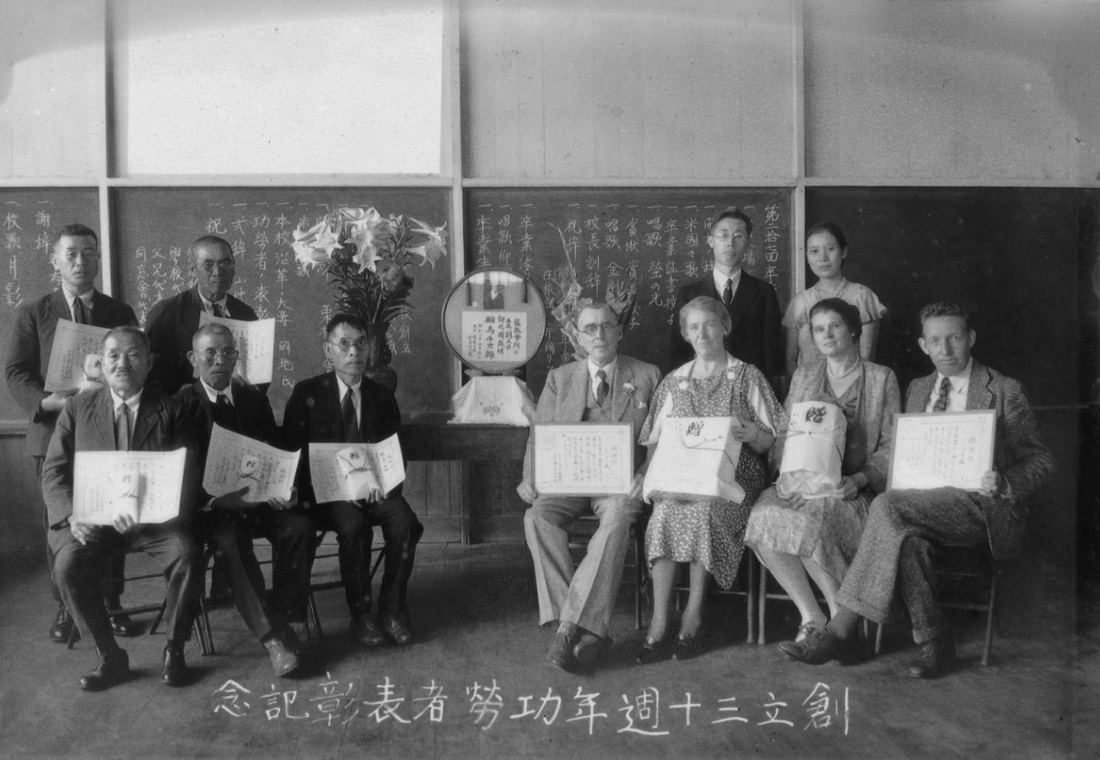 Hakalau Japanese Language School 30th Anniversary, circa 1934. Honorees (left side): front row from left to right: Mr. Koya, Mr. Miyashiro, Mr, Yokoyama; back row; Mr. Fujinaga, and Mr. Kikuchi. Others in Attendance (right): Mr. and Mrs. John M. Ross, Mr. and Mrs. George Ross, and Rev. and Mrs. Yamanaka. Source: copy of photo currently hanging in the Hakalau Jodo Mission.
For information about the individuals above, click on the highlighted names: Mr. Koya, Mr. Miyashiro, Mr. Yokoyama, Mr. Fujinaga, Mr. Kikuchi, Mr. and Mrs. John Ross, Mr. and Mr. George Ross, Rev. and Mrs. Yamanaka.
﻿Light on the Ocean, a celebration of the Jodo Shu in Hawaii was published in 1934. The section on Hakalau includes pictures of the Japanese Language School and showcases 28 church members and their families. ​ 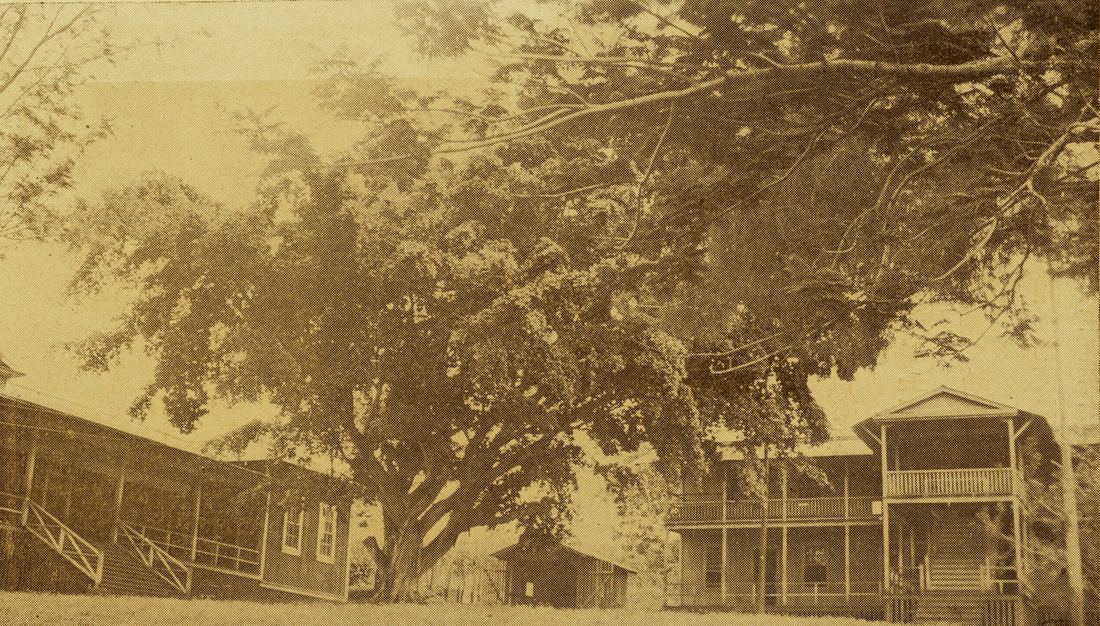 Note: The picture above, dated 1934) shows the temple, dormitory and language school/meeting space in the building to the right. The building to the left also supported the language school and, in addition, in later years continued as the language school and also served as the aikido studio and ILWU office. The current Hakalau Jodo Mission is in about the same place as the building on the right. The building on the left was demolished much later (date to be determined) and only the concrete steps remain.
Prominent Church Members and Their Families
Two of the church members featured in The Light on the Ocean were born in Hawaii, all others immigrated from Japan: 29% from Okinawa, 21% from Yamaguchi, 14% from Kumamoto, and 11% from Wakayama Prefectures. Most immigrated to Hawaii between 1902-1910, although 4 came between 1895-1899.  Most arrived in Hawaii age ages between 18-28. ​Learn more about these church members and their families by clicking on the names below:

Note: There can be multiple versions of names translated from kanji. To assist families in identifying their ancestors, below are listed the kanji as presented in the 1934 publication, along with the translation and possible variations.
A decision is made to build a new temple.

In 1936, Rev. Yamanaka and members of the temple decided to build a new temple, social hall, parsonage, dining hall and community kitchen. When the decision was made to build a new temple (or do something that costs a great deal of money), the Japanese practice was to make a wish, or ganshu, to the Buddha.  The ganshu below represents all those making the wish.

When a Japanese temple is being constructed, a munafuda is created and placed between the roof and the ceiling. It includes a blessing for the temple and identifies the individuals involved in its building, whether through financing or actual design and construction. At the ceremony called Jyotoshiki, the priest prays in front of the munafuda. This is a prayer that acknowledges the completion of the framework of the building.

During an inspection of the buildings at Hakalau Jodo Mission in April 2018, the inspector located the munafuda in the attic of the temple, attached to the apex of the roof.
Front of munafuda depicting the blessing. Photos taken by Jake Bierman, April 3, 2018, during site inspection.
Translation of front side of Munafuda :

The Hawaii Mainichi of December 5, 1936 describes the procession planned for the following day:
Photos from the Waichi Ouye Collection, courtesy of his family.

December 6, 1936. Opening Ceremony of the new Jodo Mission building and placing of the buddah. Also celebrating the 35th anniversary of the Jodo Mission and a memorial service for the Jodo Shu founder, and second and third ministers. Note that the new building is in the same location as the previous one. Source: copy of photo currently hanging in the Hakalau Jodo Mission.
​The Hawaii Mainichi, December 5, 1936, provided courtesy of Rev. Yamanaka of Japan, grandson of Rev. Yamanaka, Seventh Minister of Hakalau Jodo Mission from 1929-1937.