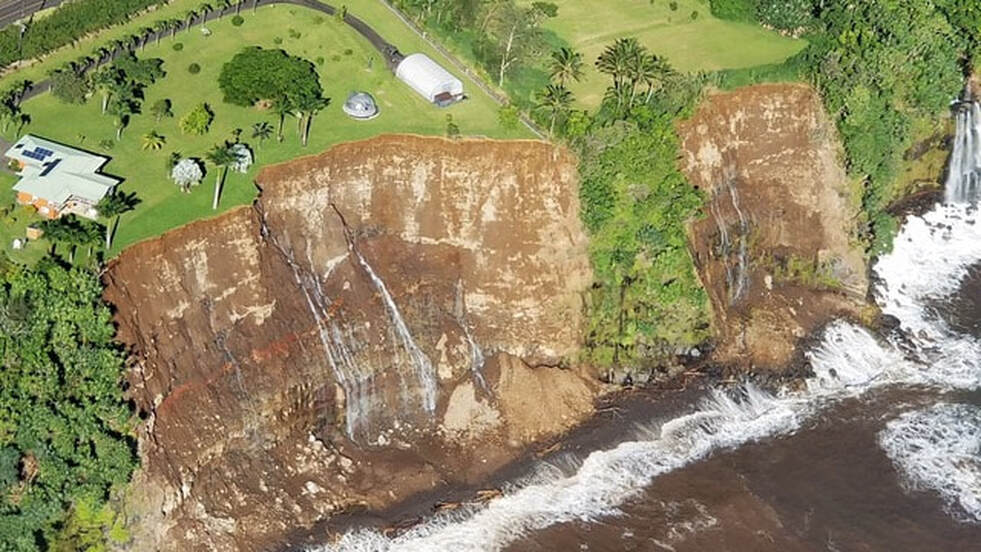 Photo of Umauma property provided courtesy of a private photographer on September 2, 2018 after the torrential rainfall from Hurricane Lane.

Cliffs along the Hāmākua Coast are subject to failure.

Cliffs along the Hāmākua Coast are subject to failure and erosion hazards from undercutting of the cliffs by waves, and slumping from absorption and release of groundwater. Heavy rains increase the likelihood of cliff failure.The fragile cliffs pose a major challenge for development. Episodic failure can remove 30-100 feet in one event. These types of episodic failures are not only hard to predict, they are impossible to mitigate. Once a failure occurs there is very little a homeowner can do to regain that land.

Cliff retreat is a natural process for any unstabilized steep slope, whether there is development or not. The failure relates to the substrate composition, ocean energy, groundwater flux, meteoric water inputs, and the geophysical aspects of the underlying rock. The Hāmākua cliffs are unstable primarily because they consist of moist soil and clay. The coast is punctuated by surface streams and groundwater "spigots" cascading onto the narrow boulder beach, such as those shown in the pictures below:
Development activities can increase the likelihood of cliff failure. Geologist John P. Lockwood, Ph.D. describes the impact of building ("mechanical disturbance", "load pressure") on Hāmākua's coastal areas in a report dealing with the arsenic contamination on Hakalau Point, dated March 18, 2014:

The entire Hāmākua coastal area, from north of the Wailuku River to Honokaa, is characterized by a mantling of deeply weathered volcanic ash deposits, known varously as the "Pahala" or "Homelani" Ash, which in turn overlie deeply weathered lava flows from Mauna Kea volcano (Buchanan-Banks, 1983; Wentworth, 1938) ... Wherever mechanically disturbed, however, these ash deposits become structurally unstable (Wieczorek and others, 1982), and are subject to "thixotropic" behavior (ability to convert from stable solids to viscous, mobile fluids when under load pressure or on steepened slopes).

In 2006, the University of Hawai`i Sea Grant College Program published a guide, "Natural Hazard Considerations for Purchasing Coastal Properties in Hawai`i". While most of the guide is geared towards properties on the beach with concerns about sand erosion, there were two common signs of an erosion or coastal hazard problem that apply to cliffside properties. Potential buyers of Hāmākua Cliff properties might want to look out for:

Amend and/ or create County Codes and Planning Department Rules to develop shoreline and building setbacks to address environmental, health, and safety priorities.

Full Text of Policy 18
Photos taken by a private pilot-photographer on January 24, 2020, after the record-breaking rainfall
during the weekend of January 11-12, 2020. The properties shown are in Umauma and Ninole.

A research team comprising staff from the Pacific Islands Climate Adaptation Science Center (PI-CASC), the University of Hawai’i and the County of Hawai’i Planning Department recently set out to quantify historic and contemporary rates of change along different types of shorelines on Hawai’i Island, using those data to model observed changes into the future through sea level rise impacts.

PI-CASC is a partnership between the U.S. Geological Survey and a three-member university consortium: the University of Hawai’i at Manoa (the consortium lead), the University of Guam, and UH Hilo. PI-CASC develops research products (information, tools, and techniques) that strengthen the capacities of natural and cultural resource managers across the Pacific to anticipate and adapt to climate change impacts.

On Hawai’i Island, a “setback policy” requires developers to place buildings at least 40 feet from the established shoreline across the entire island. This largely arbitrary line did not account for different uses of the land, nor the constantly shifting environments distinct to the island’s different shoreline types. Ultimately, it left some communities exposed to coastal hazards.
​
The research team combined existing datasets (historic aerial photos) with new data (drone imagery, topographic surveys, etc.) to quantify past and present rates of coastal change. These data were then merged with sea level rise projections and other geospatial data to estimate future impacts along the coastline using a GIS platform.
USGS Video
Read the Case Study
​Much work remains to develop objective guidelines for determining and defining the " top of cliff", and to establish revised building setbacks which include a lateral safety buffer distance equal to the anticipated 100 years of erosion based on a coastal erosion study.  Currently, there is a grant application into FEMA, and agreement with the state Coastal Zone Management program to “do the site work to be able to establish research-based shoreline setback.”

Cliff Failures within the Hakalau Kuleana

The Hakalau Kuleana, the focus of this website, includes the area of the former Hakalau Plantation, from the Kolekole River in Wailea to  the Poupou Stream in Ninole. Using Highway 19 as a measure, the Hakalau Kuleana extends from Mile Marker 14 to Mile Marker 20. In the pictures below, Hakalau Kuleana cliff failures are both common and dramatic. ​
The view from the air:
Photos by a private pilot-photographer taken January 24, 2020 after heavy rains. Note the sediment in the water.
A private pilot-photographer took the pictures below on February 25 and March 29, 2019 (from 2,500 feet).
The view from the ocean:

Photographs taken at sea level looking back at the cliffs were provided by retired marine biologist Robert Nishimoto, PhD. in March 2018. They  provide another perspective of the extensive cliff erosion and cliff failures from Kolekole to Ninole.