History of Pohakupuka, Ninole, and John M. Ross Schools by the History Committee with Assistance from the Sugar Mill Spy

The Ninole School was originally called Pohakupuka School and the first principal was a Mrs. Bridgewater prior to 1904.  In that year a classroom building was built and Miss Rebecca Macy became the sole teacher until 1908 when Amos J. Ignacio was appointed principal, a position he held until about 1918.  In 1919 a second teacher’s cottage was added along with a $5,540 four room addition to the school, bringing the school up to 5 classrooms.  This L-shaped building along with two teacher’s cottage was located just south of Manoloa Stream, near the present “white picket fence” Jack (late) and Cora Miller’s home.  Nearby was the Ninole Japanese School, properly known as Ninole Dokuritsu Gakko, which consisted of a residence and a 3-classroom building.  Due to the lack of classroom space, the 1st and 2nd graders used the Japanese school classrooms during regular school hours.  The 3rd to 7th graders used the main building.  Most students ended their education after the 7th grade.  Those that continued attended either Laupahoehoe or Hilo High Schools.

Mr. Henry was the next known principal.  In 1925 Mr. Henry was replaced by Mr. James C. Kamakaiwi, who transferred from a 2-room school house in Pahoa with his teacher wife, Mrs. Mary M. Kamakaiwi.  Principal Kamakaiwi was a disciplinarian.  He required all students to line up in the front courtyard each school morning to recite the Pledge of Allegiance and sing such patriotic songs as “America the Beautiful” and “Hawai’i Pono’i”, and followed by daily announcements.  The students were then allowed to return to their respective classrooms.

Faculty members (1928-29) were Miss Florence YJ Moo, Mrs. Rose P. Baker, and Miss Helen KH Lee and the sisters, Miss Ethel Tomoguchi and Miss Maile M. Tomoguchi.  Mr. Naope commuted weekly from Hilo to teach Hawaiian music.  Mr. Jack M. Nishimoto advised the older students who were assigned 10’ X15’ garden plots, which they had to prepare and tend.  These mini-plots not only taught gardening skills but also yielded varied type of vegetables.  Mr. Nishimoto also coached the boy’s basketball team, which practiced after school on the outdoor court and played against student teams from Laupahoehoe and Hakalau.  Ninole School had a few outstanding players, such as Shigeyoshi Ikeda and Yutaka Nakamura.

Parents purchased the text books for the students and they were passed down to their siblings or friends as they advanced to the next grade level.  Homework assignments were frequent and many students did their homework at home using kerosene lanterns.  School started in September and ended in June.  Most students worked for the sugar plantation during summer.

Most Japanese children attended Japanese school after public school classes ended at 2:30 pm.  Classes were 1 hour long during week days and ½ day on Saturdays.  The principals in the early years were Mr. Nagakura and Mr. Shigaki, the latter being a true disciplinarian in every sense of the word.  Mr. Shigaki demanded respect, such as lining up along the roadside and bowing in unison when he drove by in his car.

The highlight of the school year was on Thanksgiving Day.  On this day, the entire student body rode on a train to the Hakalau Dairy pasture to participate in athletic competition between Wailea Japanese School, Hakalau and Ninole schools. The pasture was always well-groomed before the competition.   The winner claimed the perpetual silver cup trophy.  Ninole School had its share of bringing home the trophy.  One year, Ninole Japanese School entered their dance routine, Momotaro, by Atsuko Yamagata dressed in an elaborate medieval costume and accompanied by music. It was a big hit during the program.   Lunch and numerous prizes for the competition were donated by Hakalau Sugar Company, whose manager was Mr. John M. Ross.

Another highlight was the Christmas program where the students recreated the Nativity scene at the school.  Hakalau Sugar Company provided the candy treats, usually by Santa Claus, at the end of the program.

Owning a pair of shoes was a rarity.  All students walked to school barefooted, regardless of distance.  Those living in Honohina Mauka (like the Tawara, Iwahashi, Tanaka, and Hamada children) had to commute over 3 ½ miles one way, rain or shine.

​As the children of plantation workers reached school age, expansion was necessary to accommodate increased enrollment.  This demand prompted construction of new school building elsewhere since the grounds at Ninole School was not physically suited for adding more classrooms.  In 1932 Ninole School closed after a long and colorful history and the buildings were moved to a new 7.58 acre parcel next to Nanue stream at a cost of $7,401.19.  A total of $3,654.62 was spent on materials to re-erect the school building at the new site, located next to Mr. Takeyoshi Fujimoto residence.  In 1936 a cafeteria was added, costing $1,320.  Miss Nancy Chow, cafeteria manager, prepared a gala dedication dinner.

In 1932, the new Ninole School, now called John M. Ross School, was open to students.  The school consisted of one large structure which had 6 classrooms, a principal’s office, a dispensary and a library.  There were 2 additional buildings, one for the principal and his family and the other for teachers that needed housing.

During the same year the Japanese school split into two and moved next to the John M. Ross School site.  The Ninole Dokuritsu Gakko site was located on the Hilo side of Waiehu stream (Mr. Takeyoshi Fujimoto rental was Japanese school principal Mr. Umesuke Matsuo home ) and the new Honohina Hongwanji Gakuen was built on the Hamakua side of Waiehu stream (near Mr. Yoshio Takemoto’s farm warehouse).  The principal for this school was Rev. Seido Okura.

John M. Ross School was appropriately named since Mr. Ross, as manager of Hakalau Sugar Plantation, contributed not only building materials and funds, but truly supported its establishment seeing the necessity to provide proper education to children of these growing communities.  Many alumni fondly remembered Mr. Ross as an avid supporter of the school and the Ninole and Honohina communities and their adjoining plantation camps.

The school housed grades Kindergarten to 6th grade.  Mr. Kamakaiwi was the first principal and he kept that position until his retirement in 1945.  Upon his retirement, the people of the Ninole and Honohina communities honored him for his contributions and long service with a large luau. The elaborate affair was sponsored by the Parent-Teacher Association and was attended by almost the entire community population.

Mr. Eto, a Laupahoehoe school teacher, became the school’s second principal after Mr. Kamakaiwi.   In 1947 Mr. Teichiro Hirata became principal after transferring from Pahala School.  Mr. Hirata was at the school for 8 years.  He left John M. Ross School in 1955 to take a similar position at Pahoa High School.  Prior to his retirement, Mr. Hirata took an administrative position at the State Department of Education office in Honolulu.

Mr. Yamada, an attorney by training, followed Mr. Hirata. Being a student of the law, Mr. Yamada provided a lot of help to the PTA in conducting meetings and organizing this important liaison group.

In 1956, Mr. Joseph Nishimoto served as principal for a 2-year stint.  Mr. Nishimoto was an avid waterman, who often enjoyed spear-fishing at Honohina Landing.  He was a superb competitive swimmer in his younger years and represented Hawaii in the All Armed Forces Olympics held in Tokyo, Japan in 1946.  He won 3 gold medals in the 200, 400 and 1500 m swimming events.  He was generous in sharing the Olympic experiences and accomplishments of his swimming friends with the students.  He even brought such famous Hawaiian Olympians as Mr. Ford Kono and Mr. Sonny Tanabe, Gold Medal winners.

The last principal was Mr. Takao Ito.  He was an avid baseball fan and first introduced the idea of T-Ball to the students.  He helped organize the Ninole-Honohina Little League and Pony League teams and coached several teams, and even umpired a few games when they couldn’t get an umpire.  He was instrumental in getting baseball uniforms for the boys, which was purchased through the generous donation of Mrs. Ross, wife of the late John M. Ross.

​Public health nurses and dental hygienists made regular trips to the school to treat minor health problems and conducted classes on proper hygiene, such as brushing teeth.  Most notable was the giant toothbrush and the full set of dentures.  Head lice inspection was frequent, especially since students took naps on the classroom floor after lunch using homemade denim sleeping bags.  A speech therapist visited students annually and tested each student’s speech patterns and pronunciations by recording on a vinyl record.  Most challenging were words such as “three” and “tree” or “ship” and “sheep”.
The school always presented a Christmas program in the evening, where parents and community members could attend.  There was a nativity scene with solos by students representing the Three Kings from the Orient.  Students from all classes participated in the program and the evening culminated with Santa Claus, usually Mr. Richard Toledo, handing out goody bags which had hard candy, nuts and a fruit.  On many occasions the older students and some teachers went caroling in the back of the Hakalau Plantation truck that was used to transport field workers. ​​ 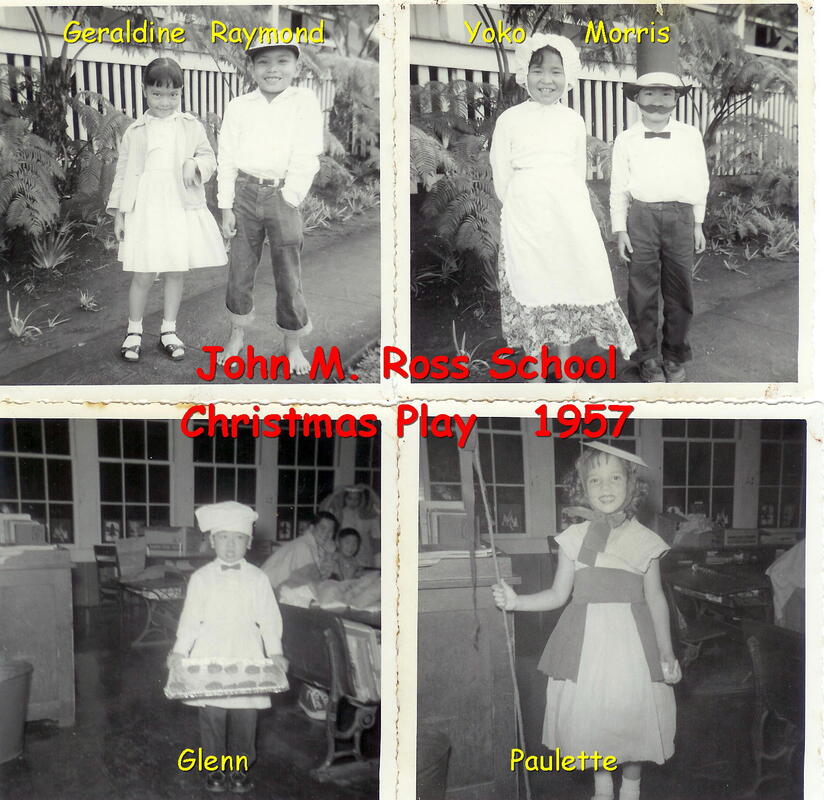 Photos courtesy of Robert Nishimoto
Lei Day celebrations was an all-day affair.  The whole school participated, usually with a hula or some other cultural dance.  After the program, races and a treasure hunt were held for children and parents with prizes given to all participants. After lunch, there was a softball game, involving both parents and children. 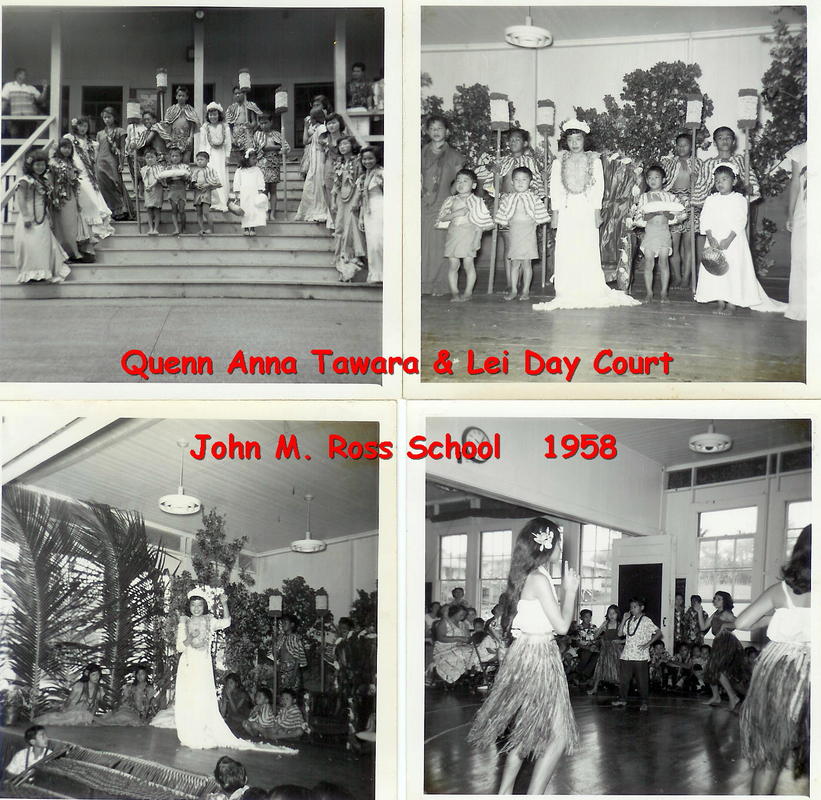 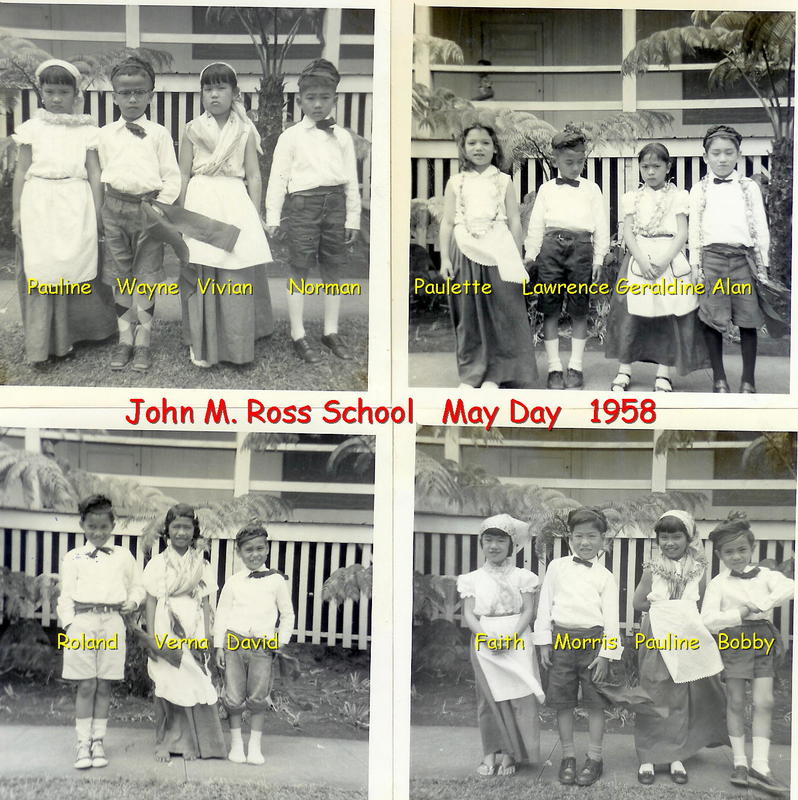 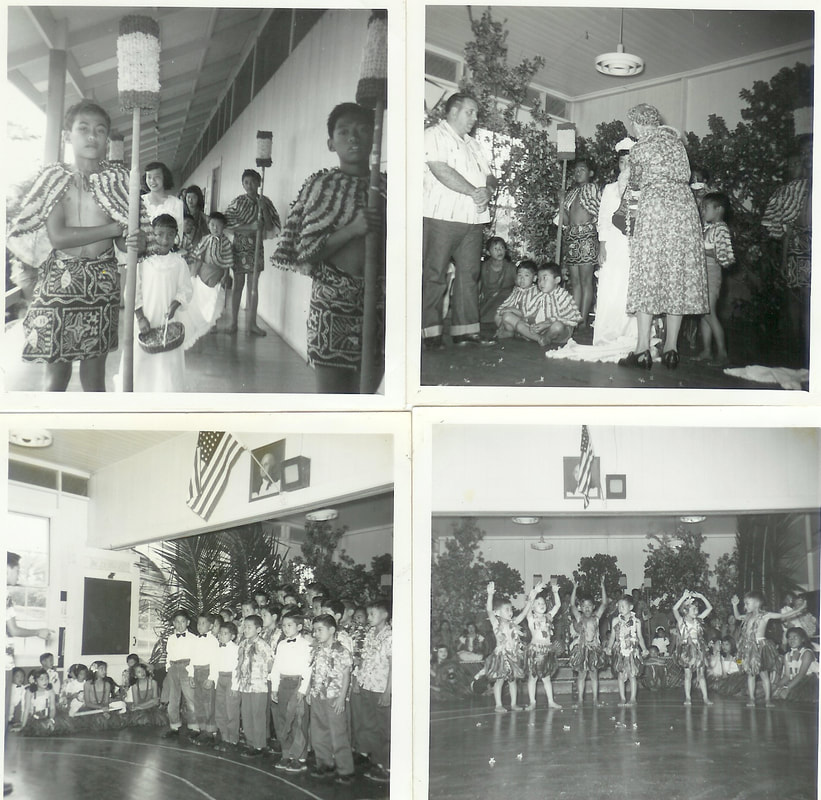 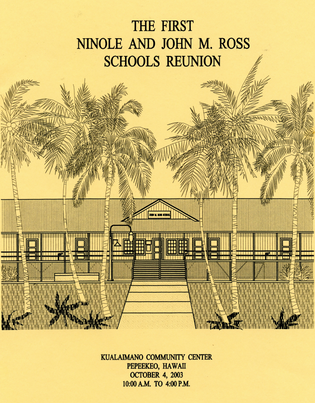