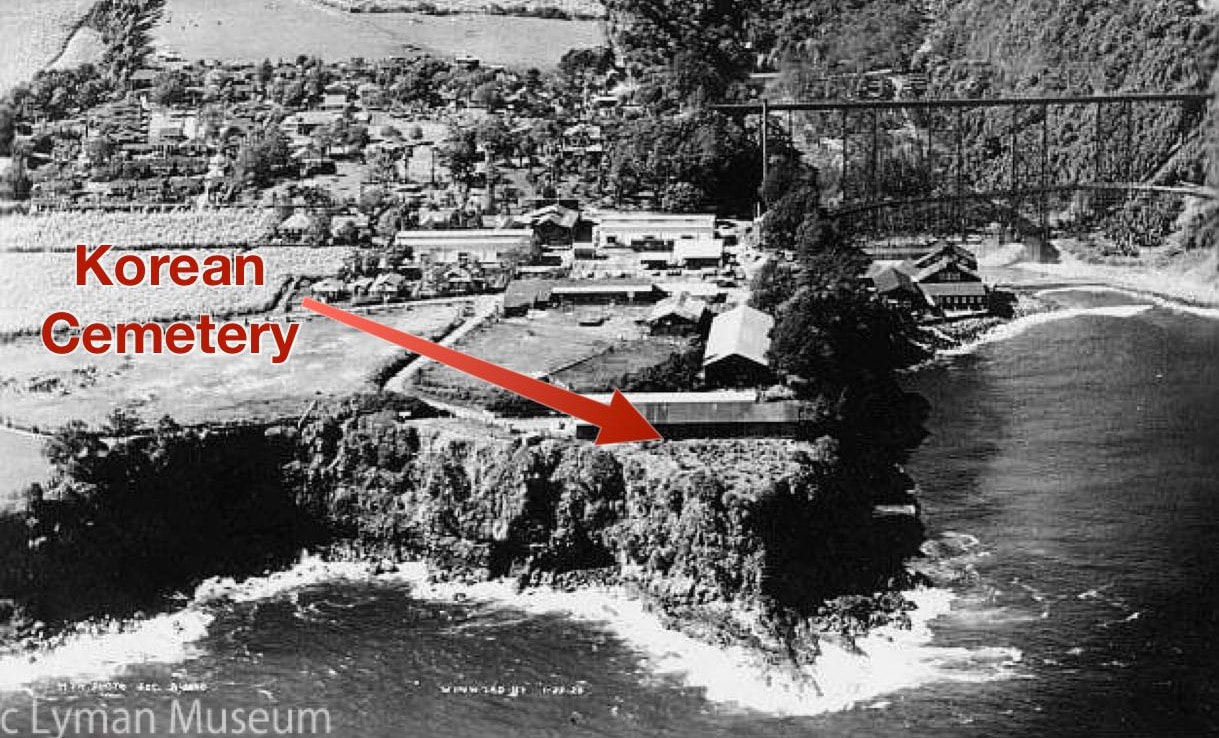 Photo taken 1928, courtesy of the Lyman Museum
Burial Grounds and cemeteries are among the most valuable of archaeological and historic resources.  They are evidence of various settlement patterns, burial practices, cultural and religious influences, economic development, social relationships, and genealogy. Unfortunately, they are also one of the most fragile resources to preserve and protect.
​
Today, there is a dedicated group working with Akiko Masuda of the Wailea Village Historic Preservation Community that cleans 3 cemeteries each month to honor the ancestors. One of the members shared the quote below from the short story "From Dreams to Ashes" from the collection “The Sound of Hilo Rain,” by Hilo writer & attorney, Roy Kodani:

In many isolated areas of the country, far removed from the towns and urban areas of Hawaii, there are graveyards of immigrants buried years ago.  Their headstones have fallen and no one comes to place flowers on their graves. They had probably worked hard intending to return to their mother country, but for one reason or another, they could not return, and now, they remain in desolate, lonely places long forgotten.  The trade winds crossing the land like ancient spirits floating by whisper their names as you pass.

Within the Hakalau Kuleana, there were at least five cemeteries. Hakalau Lower Camp included 3 cemeteries: Korean, Japanese, and Catholic. According to "Voice of Hakalau", there was also a cemetery at Kamae Mauka, although it does not show up on a map. Honohina Cemetery, on Liliuokalani Trust lands, still exists.

Hand-drawn map of Hakalau Lower Camp, known as "Down Camp" with annotations showing the cemeteries. Maps were drawn for the Hakalau Plantation in 1947 for each camp in existence at that time.
The Japanese/Korean Cemetery is deemed significant under Historic Preservation Criteria D possibly E.  Data Source: A Data Recovery Plan for Site 50-10-16-26592, Scientific Consultant Services, June 2014. ​
The photo on the left below, when enlarged, is too pixilated to provide a very clear name or date. However, an archaeologist at a university in Korea, working with Seri Luangplinith, Ph.D. of UH Hilo, think it is of a woman, a second daughter,  from Gyeongsang Province in Korea. ​Their translation of the inscription is on the right below. 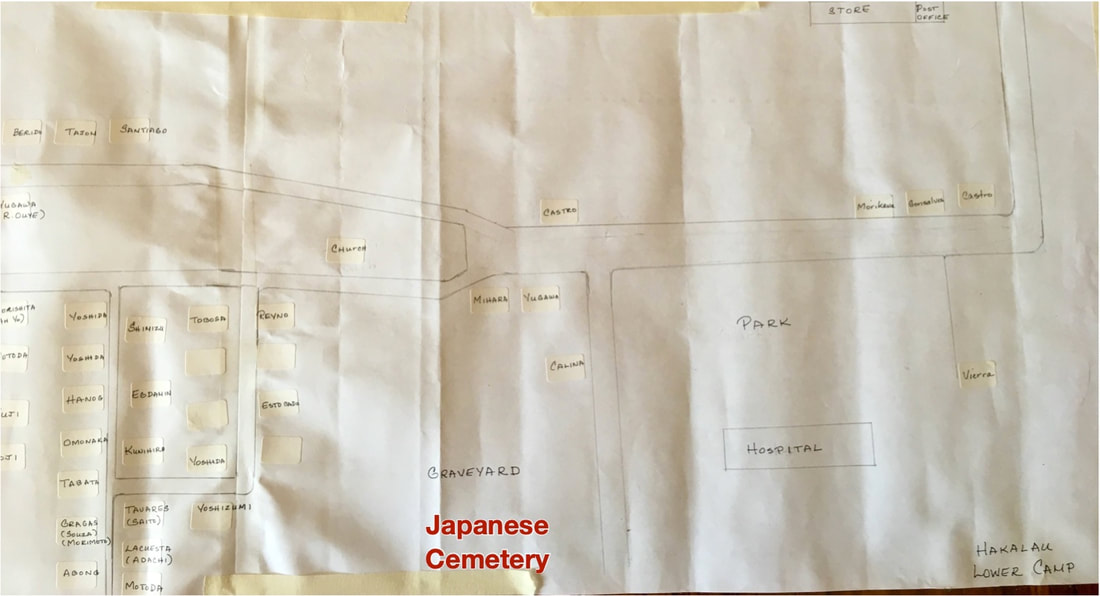 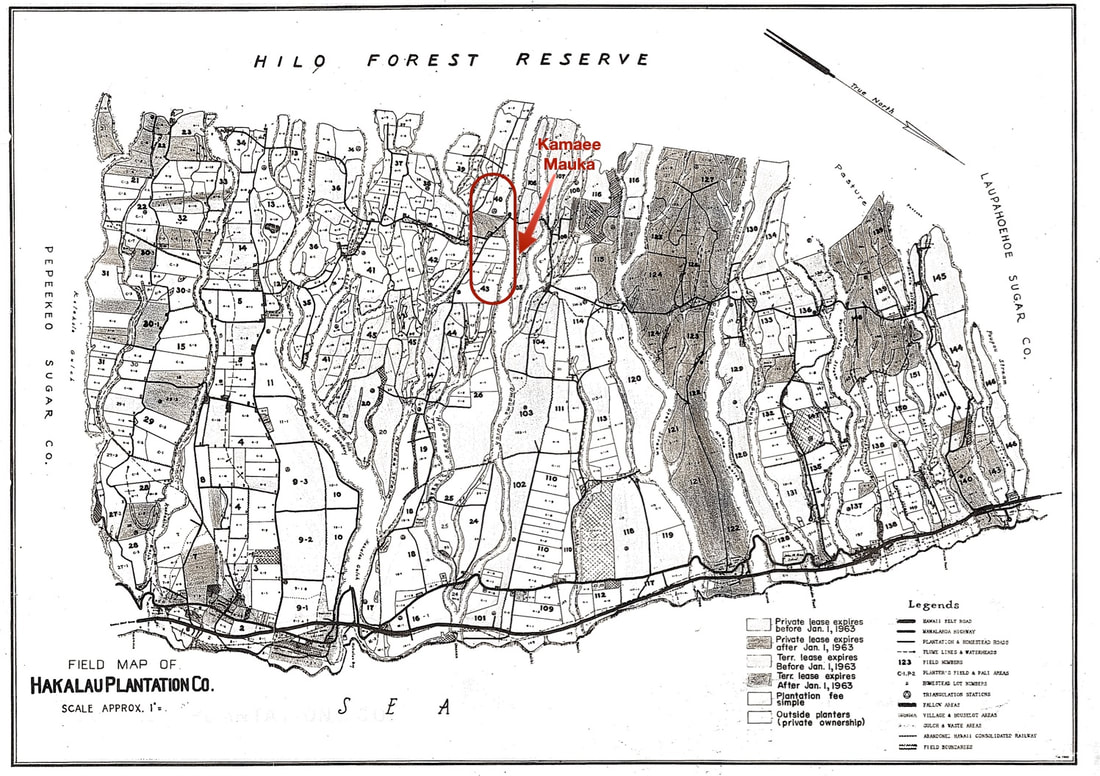 Courtesy of the Edmund Olson Trust.

The pictures below are from a forgotten cemetery just a little bit down towards Honokaa after you pass Nanue Bridge in Ninole. There’s a huge avocado tree on the makai side of the road near the entrance.
Photos and translation courtesy of Seri Luanphinith, Ph.D. 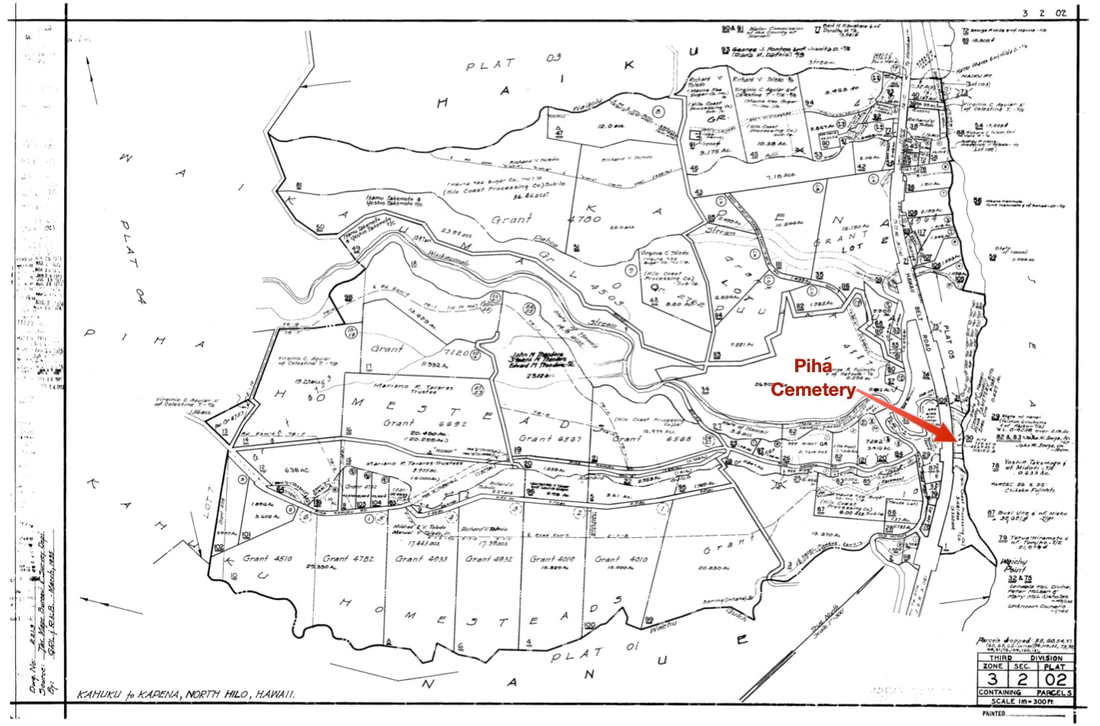 TMK and Plat Maps available at https://www.hawaiicounty.gov/departments/planning/tmk-maps
Click on map to enlarge
Contact us if you know of other cemeteries between the Kolekole River and Poupou Stream.