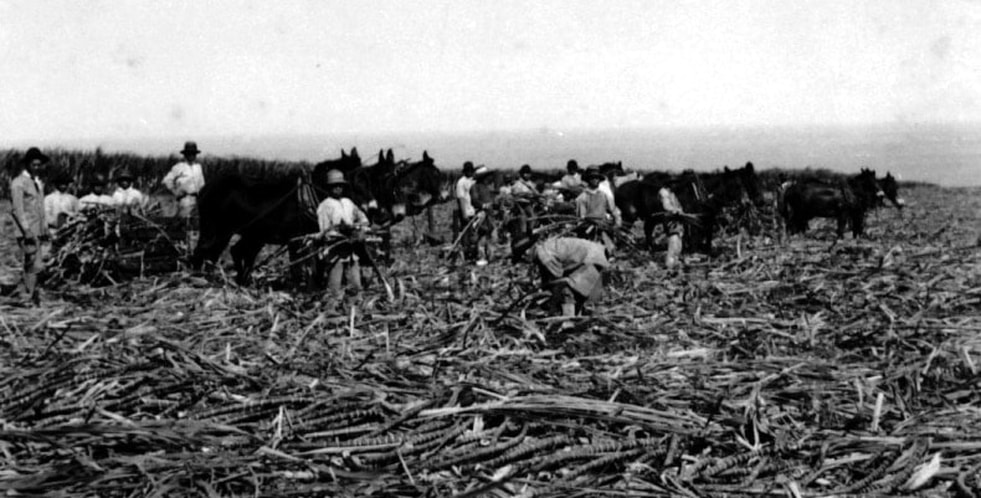 Men and mules in Hakalau Plantation. Photo courtesy of the Lyman Museum

By Bobby Fujimori, prepared for the Hakalau School and Community Reunion.
Some changes have been added to reflect current conditions.

NOTE: Links to related pages, designed to provide more pictures and content, are in bold blue
​in the narrative below. Just click on the link to review the information.
In the old days, the area between the Kolekole River and the Hakalau River was divided into two large ahupua`as--Hakalau and Kaiwiki. The division was somewhere by the Chin Chuck Road intersection. With subsequent sub-ahupua`as (Wailea and Hakalau Iki), the Hakalau Iki boundary extended to the stream on the Hilo side of Hakalau School. With the advent of the 1848 Great Mahele, much of the Hakalau/Kaiwiki ahupua`as were given to Chiefess Kekau`ohohi, grand daughter of King Kamehameha. She died in 1851 and her husband inherited her property. He died in 1864 in debt and the court auctioned off some of the property to foreigners. In the 1880's, through land grants, much of the land was sold to sugar companies. Claus Spreckels, a major sugar producer, acquired much of Wailea and Hakalau.

Chin Chuck Road to Kolekole and up to the forest line was designated homestead land. Forty one homestead lots were sold in 1912. In 1913, 20 lots abutting the Old Mamalahoa Highway, leading towards the school, were sold as resident lots. Jose Ferreira was contracted to build a Chin Chuck Road in 1915. An old timer remembers traveling the Chin Chuck Road on horse and buggy in the 1920's...on a stone and gravel road. Chin Chuck Camp was already established. A Mr. Goto was born at the camp in 1905. The reciprocity treaty of 1876 provided for free housing, water and fuel. The duplex houses had a wood burning "kudo" stove made of stone and cement.

Hakalau Plantation, with its many independent cane growers, flourished until its demise and consolidation with the Pepeekeo Sugar Company in 1963. (Wailea mill had closed in 1944 when it merged with Hakalau). Hakalau Mill was closed and sold and various ethnic camps were slowly eliminated. In fact, camps were demolished/deactivated as early as 1955/56 (Kamaee Korean Camp), 1962 (Chin Chuck Stable, Spanish Camp), and 1977 (Hakalau Lower Camp). In 1973, Pepeekeo (which included Hakalau), Onomea, Papaikou, and Hilo (Wainaku) combined and became the Mauna Kea Sugar Company. The company ventured into Macadamia and bio-mass trees.

About the year 2000, C. Brewer Company, the parent company for Mauna Kea Sugar, started to sell ten acre agricultural lots Hamakua of Chin Chuck Road up to the forest line. Hakalau proper, below the highway, was also sold. Except for the manager's house, and a few company structures, all the homes and most of the plantation buildings below the highway were demolished. Oceanside estates and subdivisions were created.

Changes have occurred. Activity has diminished. The camps are gone. Doc Hill's movie theatre, the plantation gym, Tatsuhara barber shop, Faye's beauty shop, the plantation store, the Japanese School have all closed down.  At Wailea, the ​Fujii Bakery, Yamamoto Store, Yoshimura Garage, Motonaga Garage, Nishiyama Store and Bus Service, Hamada Barbershop, Fujimoto Tailor, Doris' Dress Shop, Jimmy's Highway Cafe, Higa's Woodshop, Higa Tofu Ya, Murai Japanese School and Sewing Shop, and the mushroom farm were once thriving businesses. Today, in Wailea, most of these businesses no longer exist. The old Motonaga Garage is now Akiko's Buddhist Bed and Breakfast and provides a quiet room with breakfast by Chef Akiko. At Hakalau, the old mill site has become a park and surfing spot. A subdivision, Hakalau Plantation Village, was created at the Up Camp area. The Chin Chuck Road has changed into a collection of small farms and ranches, orchards, and retirement homes. At Umauma, we have ranches, vegetable farms, an orchid nursery, a botanical garden, and a zip line for the adventurous.
More Detail