Transom from the Honohina Hongwanji that was sold to the Honokaa Hongwanji along with the altar in 1969.

The Honohina Hongwanji Mission had an early beginning in 1899 with Rev. Chiso Uchida, resident minister of Honomu Hongwanji Mission, serving the people of Umauma, Honohina, Kahuku, and Ninole. Monthly services were observed at a temporary temple.

In 1907 under the direction of Rev. Chiho Miyagawa, resident minister of Honomu Hongwanji, the small Honohina Hongwanji temple was built. We do not have a picture of this temple. Under Rev. Miyagawa in 1908 the Fujinkai and the YBA were organized.

Growing Membership and Need for a Bigger Temple and Minister's Residence

In 1915 a committee was formed to plan the construction of a new temple and minister's residence. After almost two years of construction the new temple and residence quarters were completed. The new temple was built with Tatami seating arrangement, like the temples in Japan. Upon completion in October 1916 an elaborate ceremony was held. 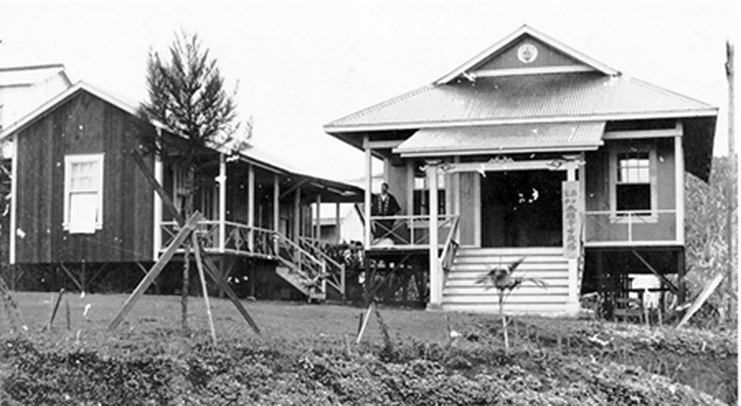 Service Committee (Board of Directors?) Members in 1918 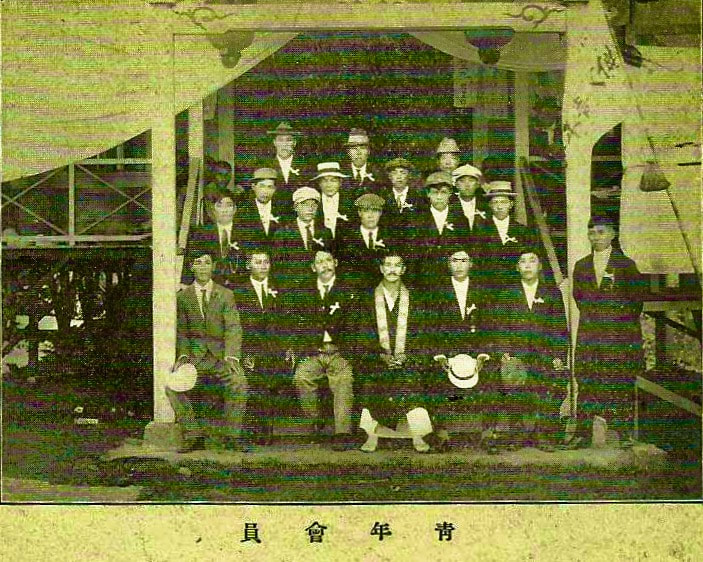 Rev. Miho Sato is in the middle, front row. Other members not identified. It was established in March 1914. In 1918 it had 30 members, they held meetings every 2nd Saturday [of the month]. Sometimes they held a parties and invited a famous person for a lecture. It helped Meiji Jingu Service Association and the Red Cross. Source: Hompa Hongwanji, 1918.
Hompa Hongwanji Hawaii (1918) included a description of the setting of the new temple as follows:.

The church stands at the west end of Honohina Camp, Hakalau [Plantation].  The frontside of the church faces to the Pacific Ocean, snowy Maunakea is in its back.  The gate is on the road from Hilo to Hamakua.  The land is about 5,300 square feet, perpetually leased from the plantation owner for free. ​

In April 1917, a distinguised visitor, Bishop Emyo Imamura, made his first visit to the mission.

After serving the Honohina Hongwanji from November 1914 to March 1921, Rev. Sato left to become resident minister of Papaikou Hongwanji.

In July 1921, Rev. Tesshin Uchida was appointed to Honohina Hongwanji and served for almost four years, up to September 1925, when he returned to Japan.

Follwoing Rev. Uchida. Rev. Ensho Nishimoto came to Honohina. During his tenure, in 1927 a branch temple of Honohina Hongwanji was built in Ninole. The dedication ceremony, which included the customary throwing of mochi from the rooftop was held.

In 1929 Rev. Seido Okura was assigned to Honohina Hongwanji. Aside from performing his regular duties at the temple Rev. Okura used to hold monthly services at private homes which were alternately hosted by individual families.

From 1937 through 1939, big changes were taking place, i.e., the planning and construction of a new temple which was both larger and more elaborate than the one built in 1916. Many hours were volunteered by all members in preparation for the construction of the new temple. The architectural design was typical of temples found in Japan. Funds for the temple were pledged by the members. In 1939 the new temple was dedicated. The old temple was converted to the YBA hall. 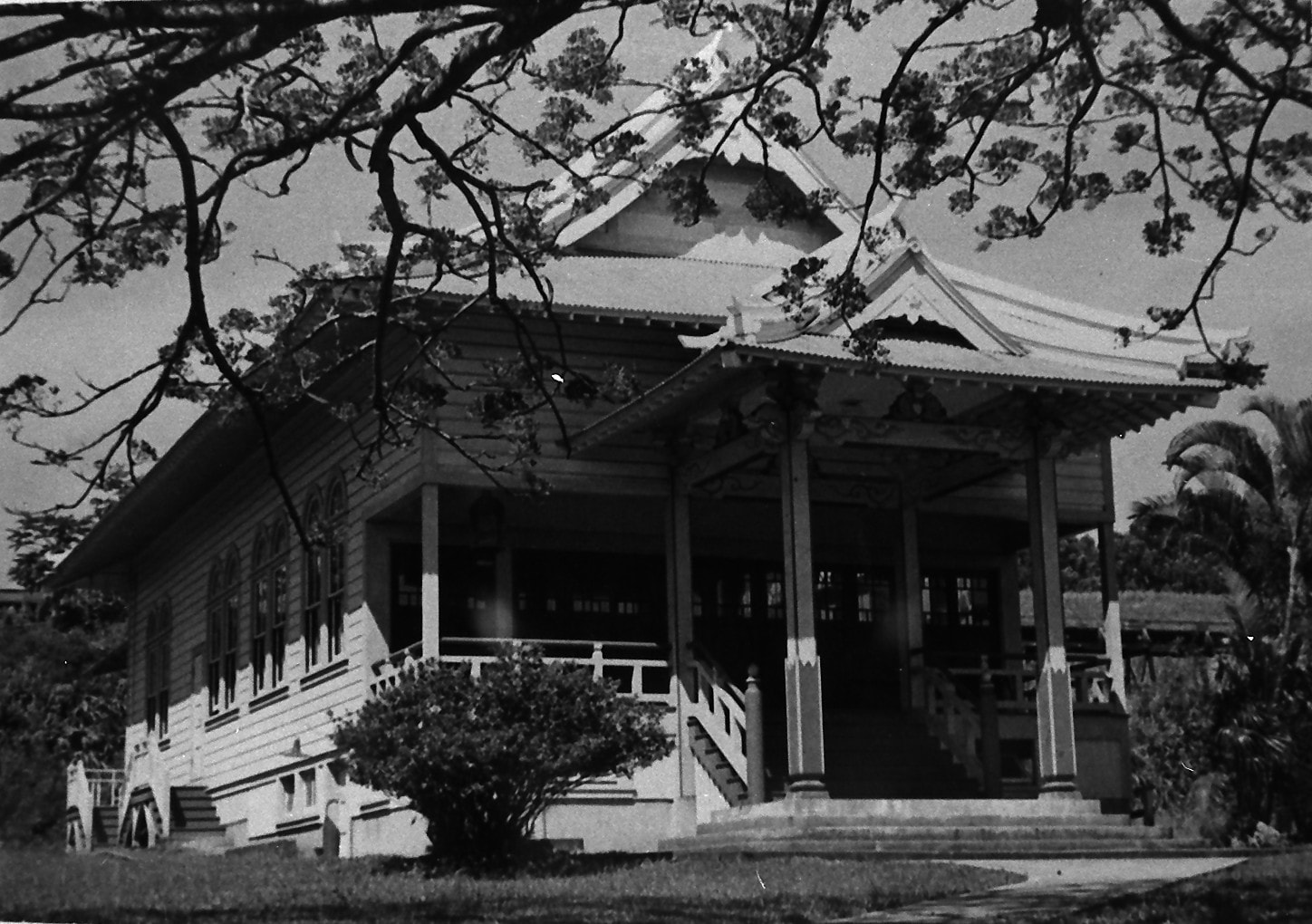 Honohina Hongwanji, built in 1938-39 and temporary Buddha stature installed in March 1939. The altar and formal dedication did not take place until 1950. Note the flume in the background, just below the roofline on the left and about the level of halfway up the temple on the right. Sugar cane growing in the background. Photo courtesy of the Lyman Museum.
From articles in the Japanese language newspaper Nippu Jiji: ​The construction of new church building of Honohina Hongwanji on Hawaii Island has been going on since October thanks to labor services by foremen Aigoro Ueno and Hikaru Matsuda.  The building will be 30 feet by 70 feet.
The annotated 1947 Hakalau Plantation map below illustrates the layout of Honohina Upper Village, which is sandwiched between Opea Gulch and Nanue Stream.  The center of town was the Honohina Store (Jitsuo Muranaka, owner) bordered by a community park, where the annual Obon dance was held.  The temple, YMBA Hall, and the classroom buildings  were located at the northern edge of the camp. 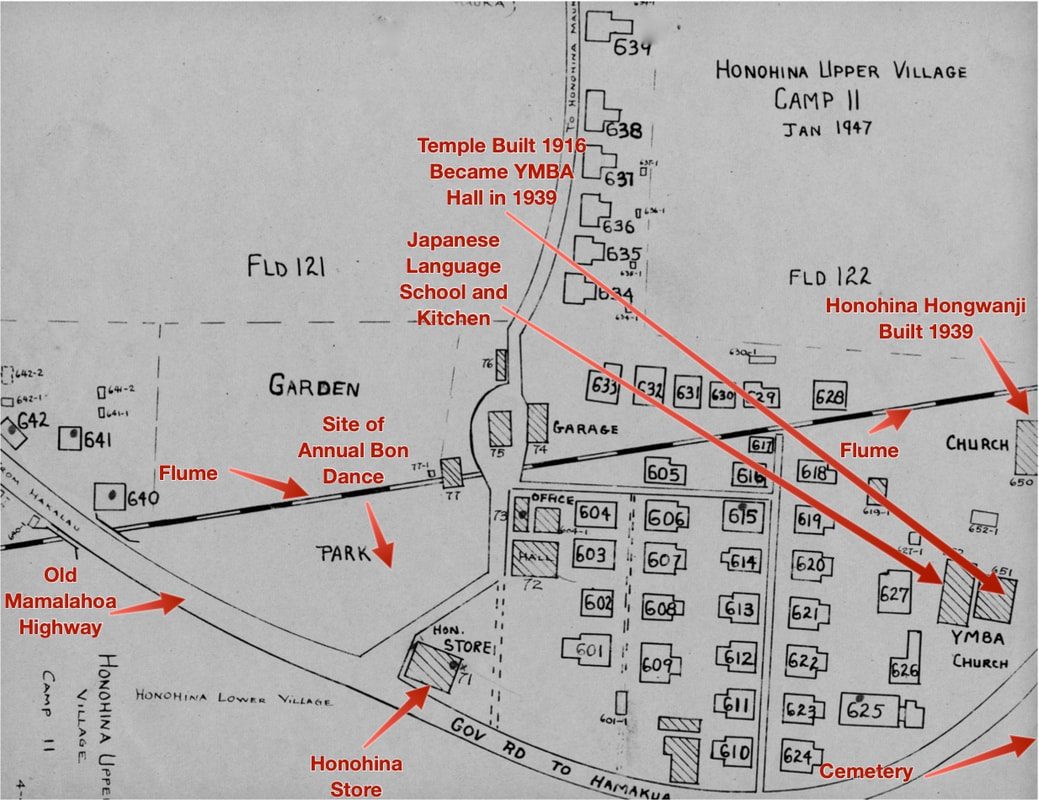 The Google Earth image below shows the location of Honohina Upper Village as it exists today. 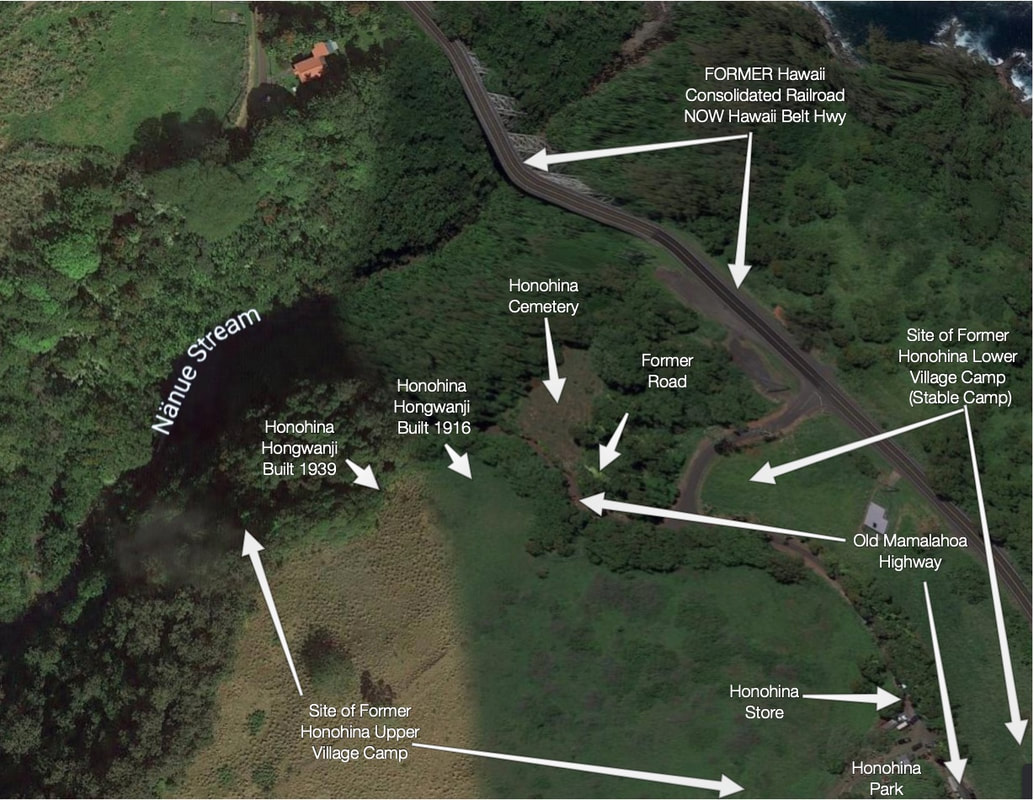 World War II and Its Aftermath

When World War II started on December 7, 1941, Rev. Okura was interned. During the war period the Kyodan and Fujinkai members saw to it that the temple, YBA Hall, and church premises were taken care of. When the war ended Rev. Okura chose to return to Japan.

The Honohina Hongwanji remained closed during the war. Ignoring the constitutional protection of religious freedom, the Office of the Military Governor’s official policy was to “discourage Japanese religious activities other than Christian.” This policy would continue until April 1944.Thus, during the first several years of the war, Buddhists and Shintoists were restricted from practicing their religion, and had to petition the Army’s G-2 intelligence division for permission, most often denied, to meet at their temples and shrines. Several Shinto shrines, such as the Izumo Taisha shrine in Honolulu, were simply confiscated and declared “gifts” to the city and county of Honolulu. On the island of Kauai, the Military Governor’s Office coordinated the closure of the island’s Japanese-language schools with the dissolution of Buddhist temples. Ultimately, 13 of the island’s 19 Buddhist temples were eliminated.
In February 1946 Rev. Kakusho Izumi become resident minister of Papaaloa Hongwanji Mission and in turn Honohina Hongwanji was under his jurisdiction. When the New Altar with its fittings finally arrived, an inspiring dedication ceremony was held. This was in November 1950.
Rev. Izumi transferred to Honolulu Betsuin in 1950, thereafter from 1951 to present many ministers served Honohina,  Hongwanji as resident minister of Honomu or Papaaloa Hongwanji, including:

George J. and Willa Jane Tanabe, in their book Japanese Buddhist Temples in Hawai'i, describe the Honohina's altar and the transom pictured below as follows:

The central altar [in the temple] is fairly standard, with a gilded central altar shrine that was originally in the Honohina Hongwanji temple....

Next to the columbarium is a huge social hall, which can easily be transformed into a traditional worship area. Above the stage is a transom of splendidly carved and colored birds and flowers. The transom had originally been in the Honohina Hongwanji temple....Behind the [sliding] doors is an altar, complete with hanging lanterns, a gilded front altar table carved with birds and flowers, and a multicolored Mount Sumeru platform for a gilded shrine with a statue of Amida Buddha. This set is believed to be the original altar furnishings of Honokaa Hongwanji. 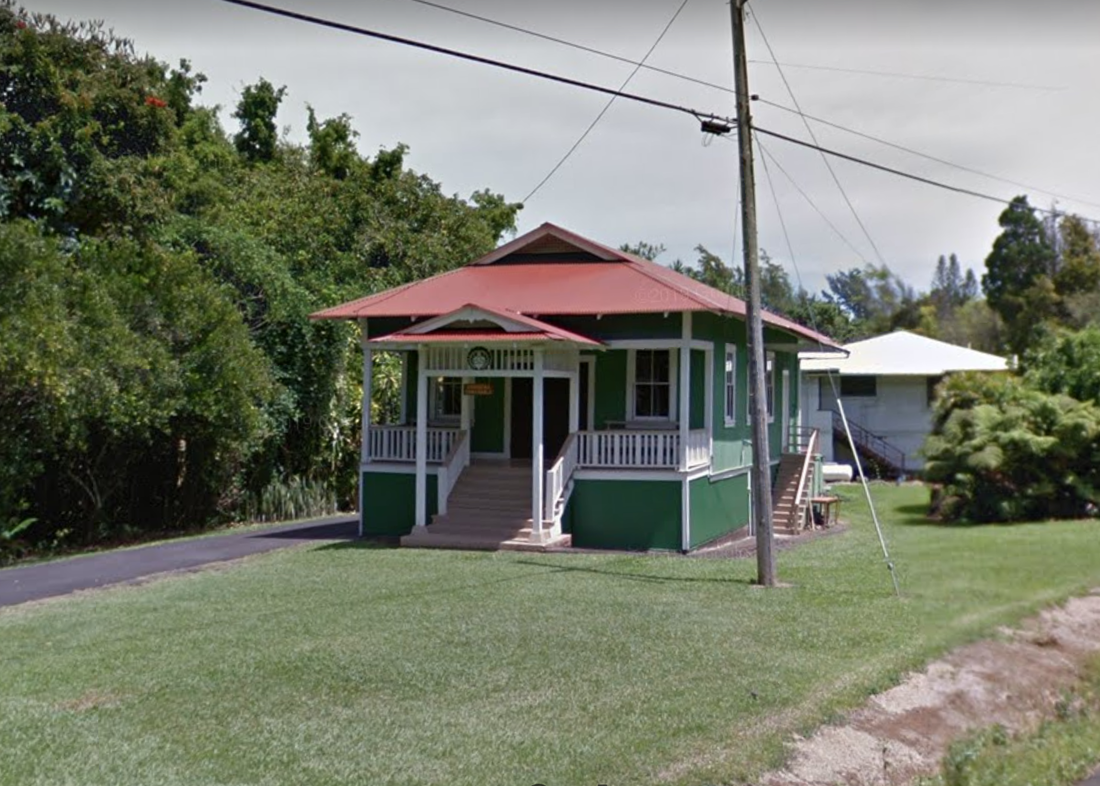 The branch temple in Ninole was upgraded to become the official Honohina Hongwanji in 1969. Image from Google Maps

Multiple sources were used to piece together the history of the Honohina Hongwanji so today we might better understand and visualize the role this temple played in the community and the upheaval caused by the demise of the sugar industry.


We continue to look for additional resources. Contact us if you have stories, pictures, or other information to share.