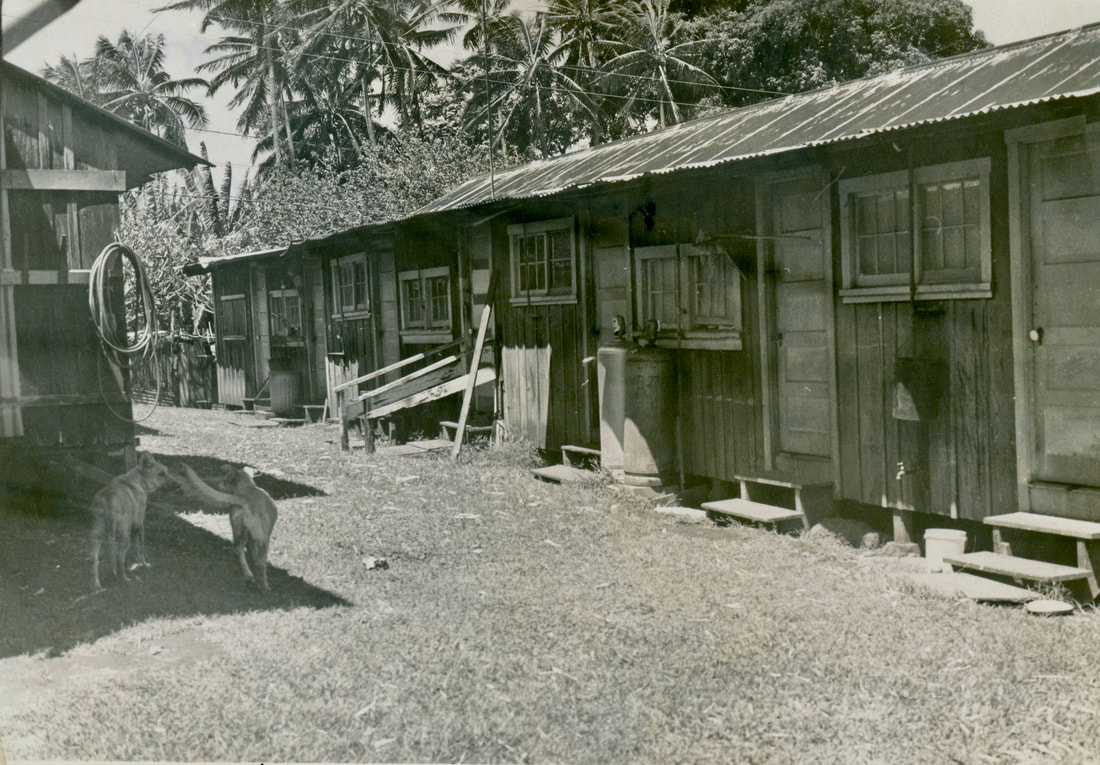 Photo from the Waichi Ouye Collection, courtesy of his family. Presumably from the Hakalau Plantation prior to creation of the 1947 Camp Maps.

Change Over Time in the Camps of the Hakalau Plantation

Plantation camps were the center of social life on the Hakalau Plantation. These camps, needed to house the workforce of immigrants labor Europe, Asia, and the Philippines, were established to support existing practices in cultivation, harvesting, and milling of cane cane. Practices changed over time, impacting:With Hakalau Plantation's consolidation into Pepeekeo Sugar Company in 1963, the objective of centralizing the workforce houses in Pepeekeo began.  By the 1980s, the camps of Hakalau, once so active, were gone.  In 1994, with the last harvest, most of the remaining workers were living in Pepeekeo, either as renters or owners.

Camps were numerous (total of 17 in the early 1950s) and spread out for several miles throughout the plantation’s cane land at elevations from near sea level to 1,200 feet. Apparent reasons for this:
​In the map below, the location of camps is noted on the Hakalau Plantation Field Map from 1954. 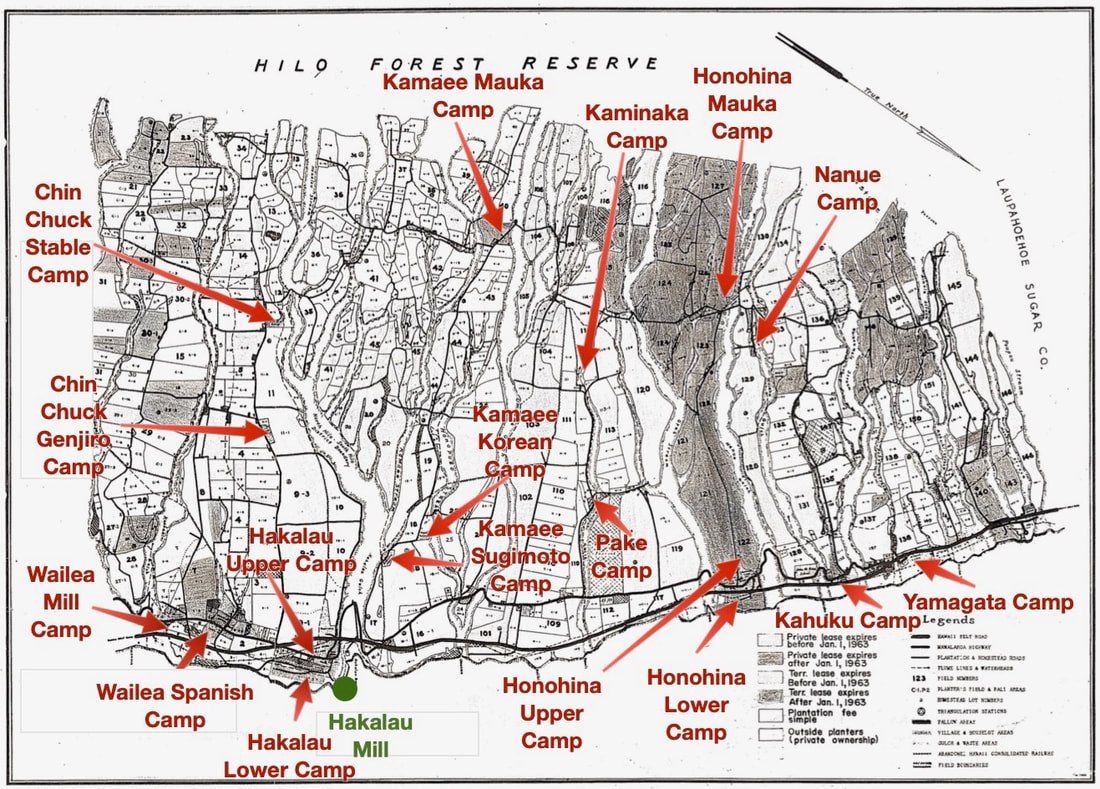 Sources: Hakalau Plantation Company Field Map from 1954, annotated using the hand-drawn camp maps from 1947 which show adjacency to specific fields. The Field Map was provided courtesy of the Edmund Olson Trust Archive. *Hakalau Plantation extended from the Kolekole Gulch near Wailea to the Poupou Stream in Ninole.

Download File
The Domestic Water Map of 1944 (not provided here because it's very hard to read) lists additional camps that no longer existed in the 1950s: Gulch Camp, Porto Rican Camp, Tara House Camp, Uma Uma Mauka Camp. There may have been other camps that were abandoned prior to 1944.
​Pictures of the camp buildings in existence in the early 1950s, copied from insurance valuation forms, are displayed on the separate pages for each of the camps. The photos of buildings from the Hakalau Plantation provided courtesy of the Hawaii Sugar Planters Association Archives at the University of Hawaiʻi-Mānoa - Hawaiian Collection within the Hilo Coast Processing Co. series. 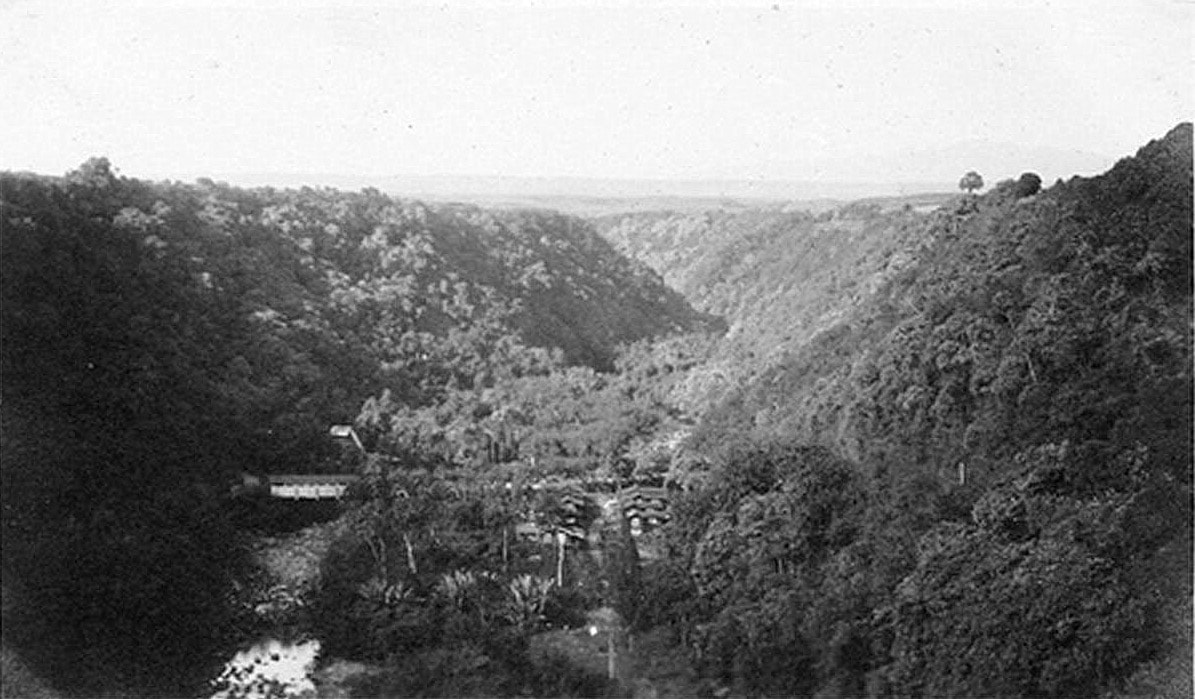 Hakalau Gulch Camp sometime between 1907 when the covered bridge was either replaced or refurbished and 1930 when the current concrete bridge was built. This camp, believed to have been Camp 10, ceased to exist with the April 1, 1946 tsunami. Photo courtesy of Steve Sutter.

By the early 1960s camps were no longer ethnic-specific. While residents were predominantly of Japanese ethnicity because they were the largest group, generally there was also mix of Filipinos, Portuguese and others. ​

Camp Structure, the Quality of Housing, and the Impact of Workforce Reduction

Plantation Management Perspective Regarding Housing
​
A 1944 article in the Voice of Hakalau was republished in the newspaper describing the perquisite of free housing.

Depopulation and Dismantling of the Camps:
​Timeline for the End of an Era

The long-term workforce reduction led to the depopulation of the camps.  The insurance photos of dwellings from the early 1950s sometimes identified vacant dwellings. In addition, the Occupant Lists from the early 1960s often did not have family names documented for individual dwellings.  These homes were probably vacant. Detail on the depopulation and subsequent dismantling of the camps is provided in the timeline below.
1925-1950: Industrywide, the workforce decreased by two-thirds from a total of 48,473 workers in 1925 to 15,935 in 1950.

1950-1959: The viability of the Hakalau Plantation was repeatedly raised in the company's annual reports, along with mention of very limited maintenance to existing camp structures. For details, see 1950s Details of the Timeline.

1951: The construction of the new Territorial Highway through the plantation necessitated the relocation of ten houses at Hakalau upper camp, eight houses at Honohina, and five houses at Ninole. Source: 1951 Annual Report

1956: All houses in three vacated villages, as well as the former Hakalau hospital building were sold to employees on a removal basis (this is the first reference to selling houses on a removal basis). Two unoccupied bachelors’ quarters in Hakalau upper village were remodeled and converted into offices for the industrial relations and industrial engineering departments. Source: 1956 Annual Report

1957: Several vacated houses in outlying villages were sold to employees for removal from the premises. Source: 1957 Annual Report

1958: The availability of vacant houses in centrally situated villages made possible the relocation of employees residing in outlying areas. Source: 1958 Annual Report

1961: Yokogawa Camp, located at Honohina Mauka, was vacated and all houses sold to be removed to buyers’ properties. Source: 1961 Annual Report

1962: Most of the 600 acres of Kamaee Mauka land, formerly cane land, to be planted in timber as a long-term investment. Source: Hawaii Tribune Herald, Hakalau Sugar Sets Up 600 Acres for Timber, January 21, 1962, accessed via Newspapers.com.

Fujimori Camp, an adjunct of Chin Chuck Stable Camp, and a portion of Wailea Spanish Camp were vacated and all houses and buildings sold on a removal basis. The vacated areas in both camps were cleared and planted in cane. Source:  1962 Annual Report
​
1963: Hakalau Plantation became part of the Pepeekeo Sugar Company. Manager Herbert Gomez gives a public talk on May 17, 1963 regarding consolidation of the population.  Source: Hawaii Tribune Herald, Kalanianaole, Hakalau Schools May Consolidate, May 14, 1963, accessed via Newspapers.com.

1964: A total of 27 company-owned houses and buildings were sold during the year on a removal basis. Residents of Spanish Camp were moved into Wailea Village. Source: 1964 Annual Report

1965: All vacant houses in Chin Chuck Stable Camp were sold on a removal basis. The Chin Chuck land would soon be plowed and planted in sugar cane. Source: 1965 Annual Report

1966: Groundbreaking took place for the new Kulaimano Subdivision developed by Pepeekeo Sugar Company, in conjunction with the ILWU. This was the first step in creating housing for sugar workers who were gradually being moved out of the old plantation camps along the Hamakua Coast. Source: Hawaii Tribune Herald, Groundbreaking Slated at Pepeekeo Subdivision, August 26, 1966 and New Housing Will Replace Old Plantation Camps, July 15, 1975, accessed via Newspapers.com.

1969: Honohina Hongwanji dismantled and sold on a removal basis in August 1969. Source: A Grateful Past A Promising Future, Honpa Hongwanji Mission of Hawaii, 1989

1977: Dwellings in Hakalau Lower Camp were gone by 1977. Source: Hawaii Tribune Herald, How Hakalau Changed from Farms to Homes, January 18, 2004, accessed via Newspapers.com.

By the 1980s, the camps of the former Hakalau Plantation were gone, with homes either moved elsewhere or demolished.

1982-1985: Hakushi Tamura, Minister at the Hakalau Jodo Mission from 1979-1996, shared his memories of what had been Hakalau Upper Camp during the period of about 1982-1985, a period when most of the houses were vacant or had been moved or demolished. Cane was planted wherever possible and the jungle was encroaching on the Mission. Source: email from Rev. Tamura.

1994: The last harvest of cane on the lands of the former Hakalau Plantation (later part of Pepeekeo Sugar, then Mauna Kea Agribusiness, then Hilo Coast Processing Company) took place in 1994.   By that time, most of the former Hakalau camp residents were living in Pepeekeo, either as renters or home owners. Source: Hawaii Tribune Herald, September 2, 1994, accessed via Newspapers.com.

How did we piece together this history?

Our understanding of plantation camps and life on the plantation comes from a variety of sources: