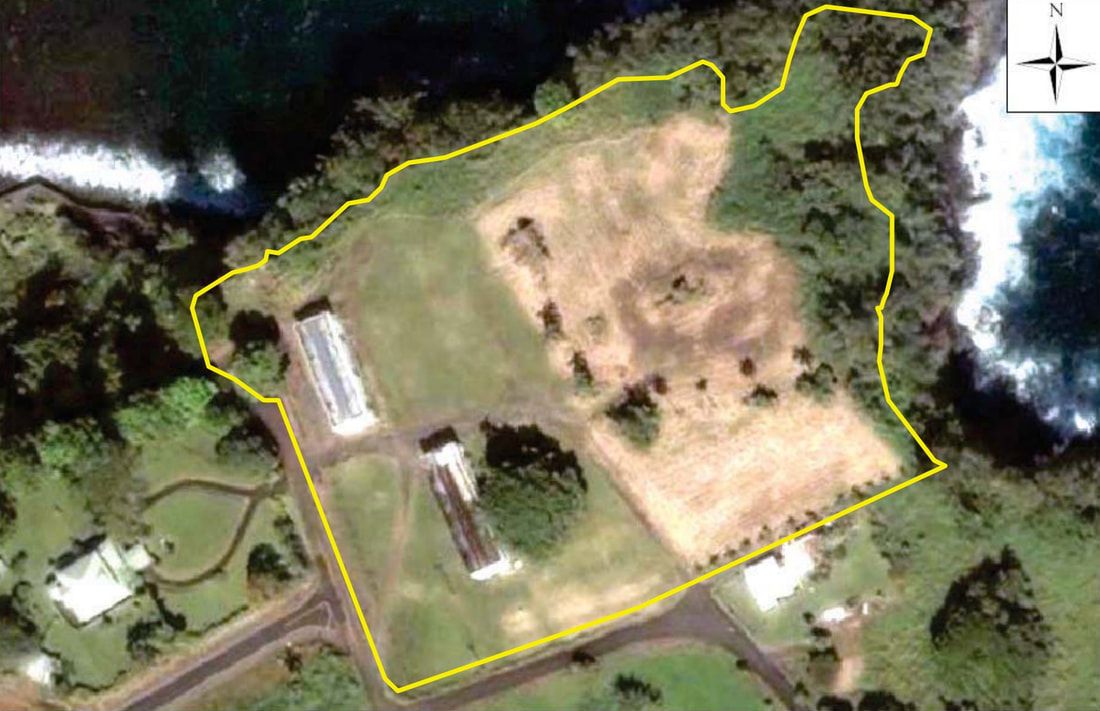 During a County Finance Committee hearing on June 2, 2016, Steve Shropshire, principal of the Shropshire Group, LLC,  which owns Hakalau Point, described the arsenic contamination at the site:

You may know that this is one of the highest concentrations of arsenic on the island and maybe the State. It was the result of a seed dipping facility...part of the Hakalau Plantation Infrastructure. (video segment from 30:43-31:06)

Details on the final cleanup action, including a summary of public comments, can be found in the Final Removal Action Report  prepared by Integral Consulting Group for the Hawai`i Department of Health, dated June 18, 2014.  Included below is an excerpt from the conclusions and recommendations:

Four removal action alternatives (plus the No Action alternative) were evaluated in term of effectiveness, implementability, and cost. Alternative 5, Consolidation and Capping of Arsenic Category C and D Soils at Source Area ("Capping in Place"), was determined to be the optimal remedy. All other alternatives (2, 3 and 4) included significant excavation of arsenic-impacted soils from within the 40-ft shoreline setback adjacent to the cliff face, and were determined to be technically infeasible due to slope stability concerns. Upon approval of the recommended removal action alternative by HDOH, a removal action work plan will be prepared to provide design specifications and guidance in implementing the proposed remedy. (p. 8-1)

The 1956 Sanborn Map below shows the location of the Poison Mixing Shed on Hakalau Point. 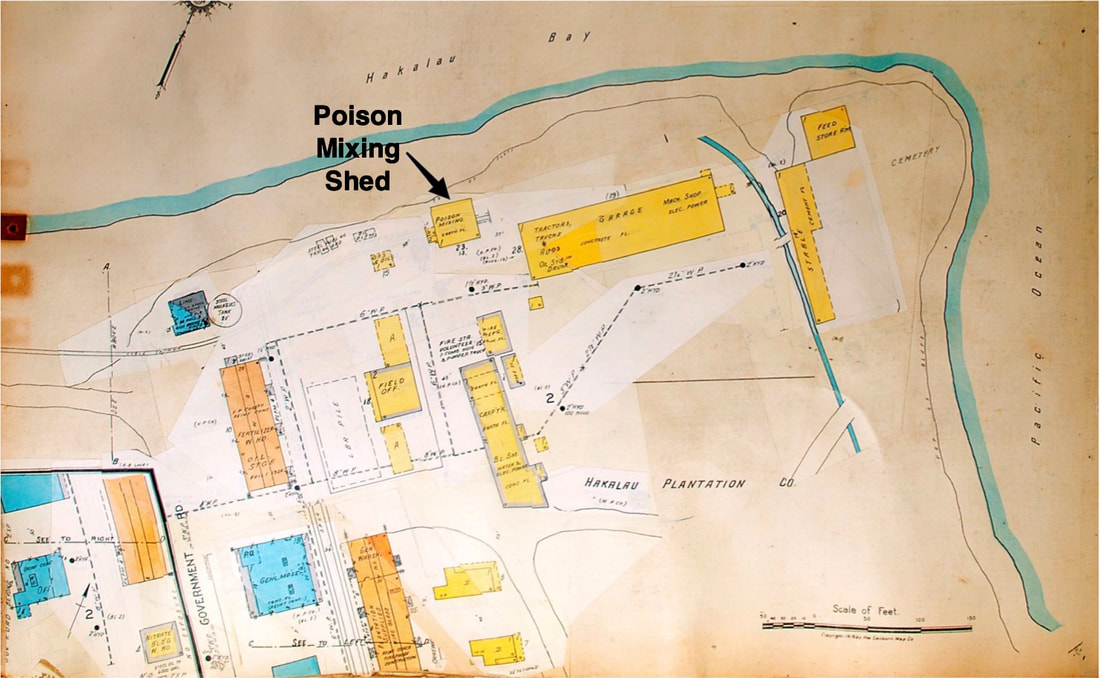 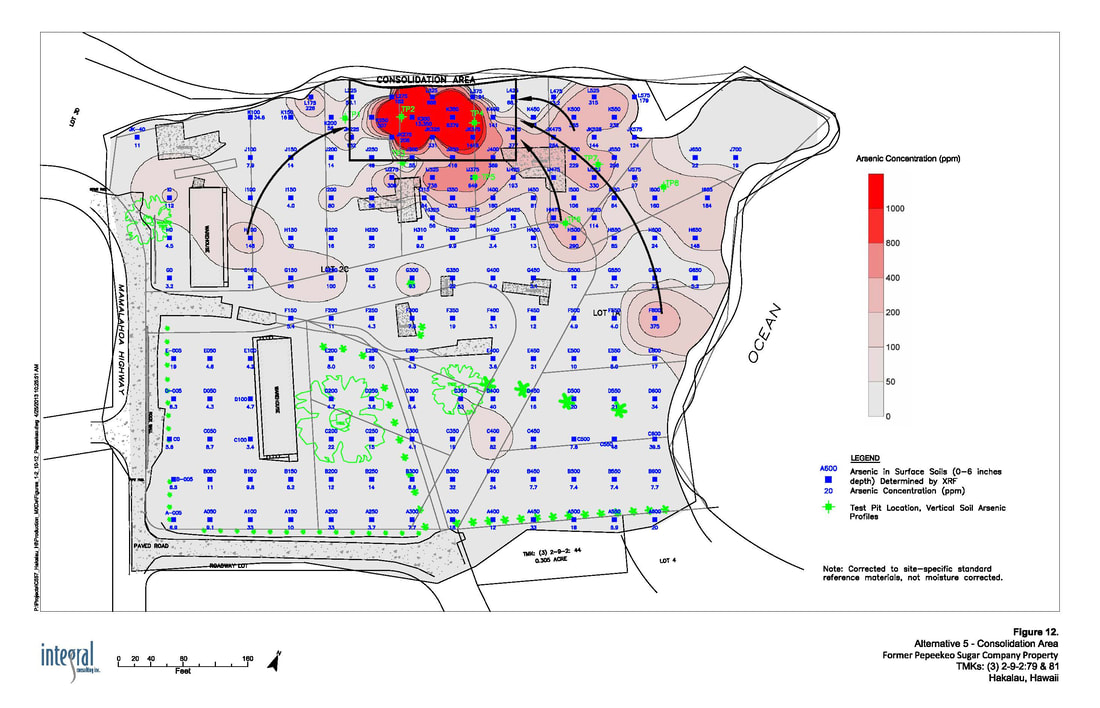 Below, the photo on the left shows the location of the poison mixing shed, the area of highest arsenic concentration. The photo on the right below illustrates the instability of the cliffs.

On December 27, 2017, the Planning Director approved an SMA Minor Permit for the landowner of Hakalau Point to consolidate and resubdivide two lots into two lots and establish a distillery, food manufacturing and processing operation, watchman's quarters, brewery, tasting room, restaurant, and related improvements including fencing of the arsenic contamination area, landscaping, and the "as-built" carport, as presented in SAA 17-001574, subject to the applicant's compliance with the conditions of approval. Two of the conditions attached to this Minor Permit are related to the arsenic remediation:
November 7, 2019 the County Department of Planning acknowledged HDOH HEER clarification related to compliance with Condition No. 7. Specifically, the landowner must complete the following prior to the issuance of a Certificate of Occupancy:

December 27, 2019 the Hawaii State Department of Health approved the final remediation implementation work plan presenting the actions to be taken for the protection of human health and the environment over a portion of the Former Pepeʻekeo Sugar Company property identified by Tax Map Key (3) 2-9-002:079 and 081, and located at 29-2306 Old Māmalahoa Highway, Hakalau, Hawaiʻi. The plan outlines the actions to be taken to satisfy the requirements of Condition 6, identified in a July 12, 2018 letter from the Hawaii Department of Health (HDOH) Hazard Evaluation and Emergency Response (HEER) Office to the Hawaiʻi County Planning Department (State of Hawaiʻi Department of Health, 2018). These actions include: 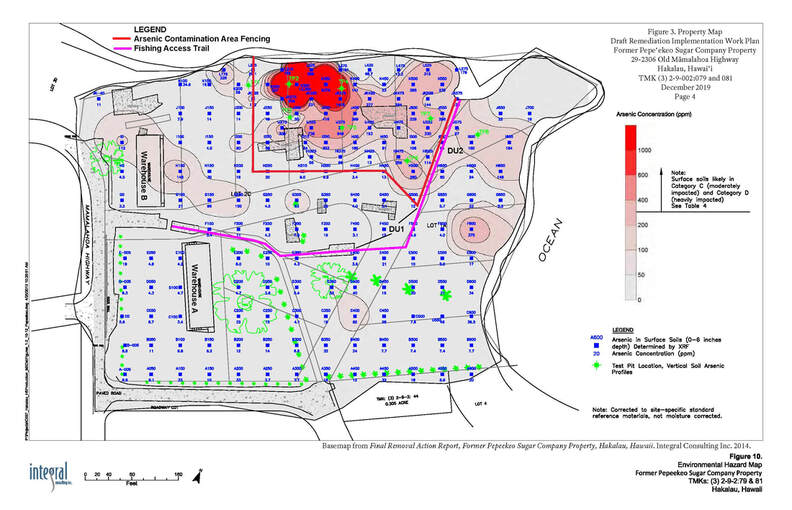 June 22, 2020 - The Department of Health has expanded its online resources. Included in this effort is updated HEER Office website with a helpful section devoted to arsenic contamination:
https://health.hawaii.gov/heer/guidance/specific-topics/arsenic/
A series of arsenic fact sheets supply useful information:
The Department of Health now has an on-line database of HEER sites and documents that are publicly available. The site is called iHEER, and here is a link to related to Hakalau Point:
https://eha-cloud.doh.hawaii.gov/iheer/#!/site/2284/details/view