The emphasis of the early years, during the time of Ministers Soma, Suzuki, Matsui and Tachikawa, was building the Japanese Language School, recruiting students and supporting the educational mission.

​The role of the Japanese language schools in Hawaii changed over time and is described in Kodomo no tame ni: For the sake of the children: ​

One of the first language schools had been founded in 1896...Soon the idea of teaching the Japanese language to Nisei became extremely popular, especially since the schools facilitated communication and cultural transmission within the Issei family and provided a child-care center for working parents.  With the proliferation of Buddhist institutions, the Japanese language schools came under the control of a more "Japanesey" leadership. Besides instruction in the language, reverence for the emperor and a strong attachment to things Japanese dominated the curriculum of the Buddhist-operated language schools. Many young Nisei would therefore attend not only public school, learning American culture and language, but would study the ways of Japan at the language schools. (Source: Dennis M. Ogawa, Kodomo no tame ni: For the sake of the children, The University of Hawaii Press, 1978,  p. 141)

About the portraits of Rev. and Mrs. Soma: ​

On Thursday, December 10, 2015, Mrs. Mariko Yamasaki, the granddaughter of the first minister of our church Rev. Senri Soma, her friend, her second cousin and the second cousin’s haole husband visited our church. The second cousin is a great grandniece of Rev. Senri Soma’s wife and lives in California with her husband. According to Mrs. Yamasaki, the pictures of a minister in Japanese style robe and a lady in kimono hanging on the Hamakua side wall of Hondo are that of Rev. Senri Soma and his wife Mine. Mine’s maiden name is Tao. When Rev. Soma built the temple, he called his and Mine’s relatives to come to Hakalau to help them. One of Mine’s brothers didn’t go back to Japan and his great granddaughter is now in Hilo. Rev. and Mrs. Soma then moved to San Fransisco to build a temple there. Some of relatives went with them. They couldn’t build a temple and went back to Japan. One of the relatives settled down there. ​ (Source: Hakalau Jodo Mission Bulletin, January-February, 2016, as reported by Jan Nakamura, President of the Kyodan (Board of Directors)

​1909-1912: A Period of Maintenance for the Hakalau Jodo Mission Under Third Minister Matsui Kido

In the period 1918-1920, as depicted in the pictures below, men wear western attire, while many of the women choose to wear traditional Japanese attire in their official Japanese Language School picture. 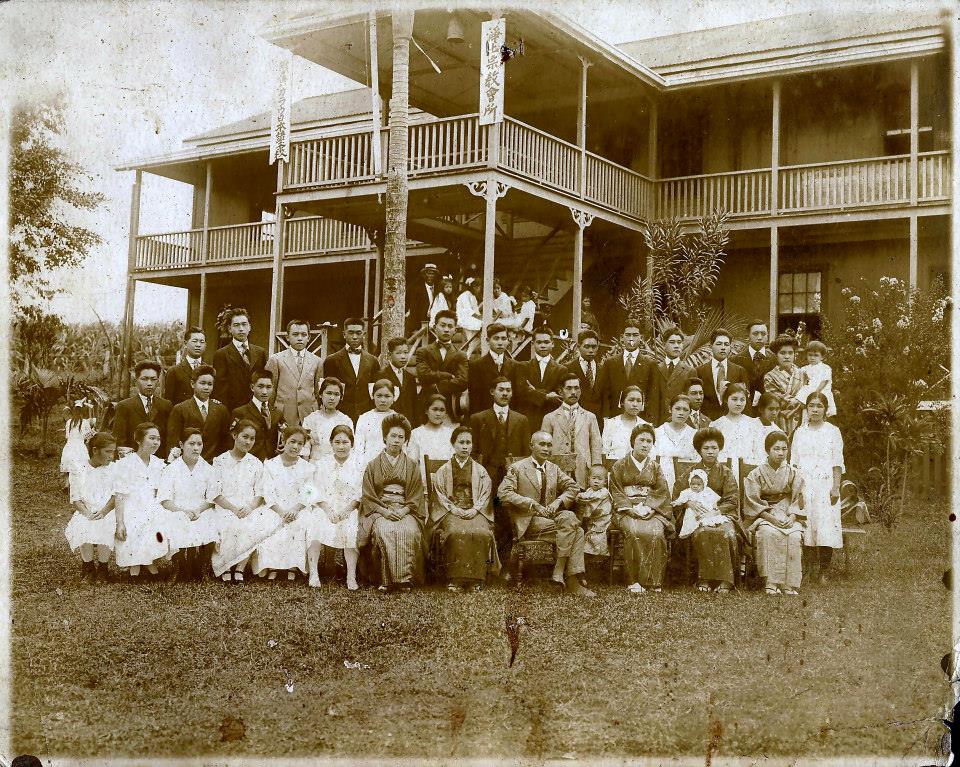 Hakalau Japanese Language School circa 1918-1920. Rev. Tachikawa is sitting in the front row to the right of center. Assistant Ministers Yamaguchi Ryukai and Soga Tetsuzui stand behind him. Note: men wore Western attire, while many of the women chose to wear traditional Japanese attire in their official Japanese Language School picture. Photo courtesy of Jaime Yugawa, great grandson of Tetsuo and Yae Yugawa