Over time, buildings were repurposed, torn down and new buildings were erected to meet the demands of changing technology and modes of transportation. Maps below illustrate some of the changes.

Sanborn Maps
Sanborn maps were originally created to allow fire insurance companies to assess their total liability. Since they contain detailed information about properties and individual buildings, Sanborn maps are invaluable for documenting changes in the built environment over time.
1919
The Hakalau Plantation at this time was reorganizing operations to accommodate the shift in mode of transportation of sugar from ships to railroad. While the Hawaii Consolidated Railroad extended its reach to Hakalau in 1911, it was not until 1920 that the two sugar warehouses next to the railroad tracks were built and transport of sugar by train replaced transport by ship.. In the Sanborn map below, the layout shows the sugar warehouses located near the bluff above the Hakalau Landing, a configuration which made sense during the era in which sugar was transported by ship. 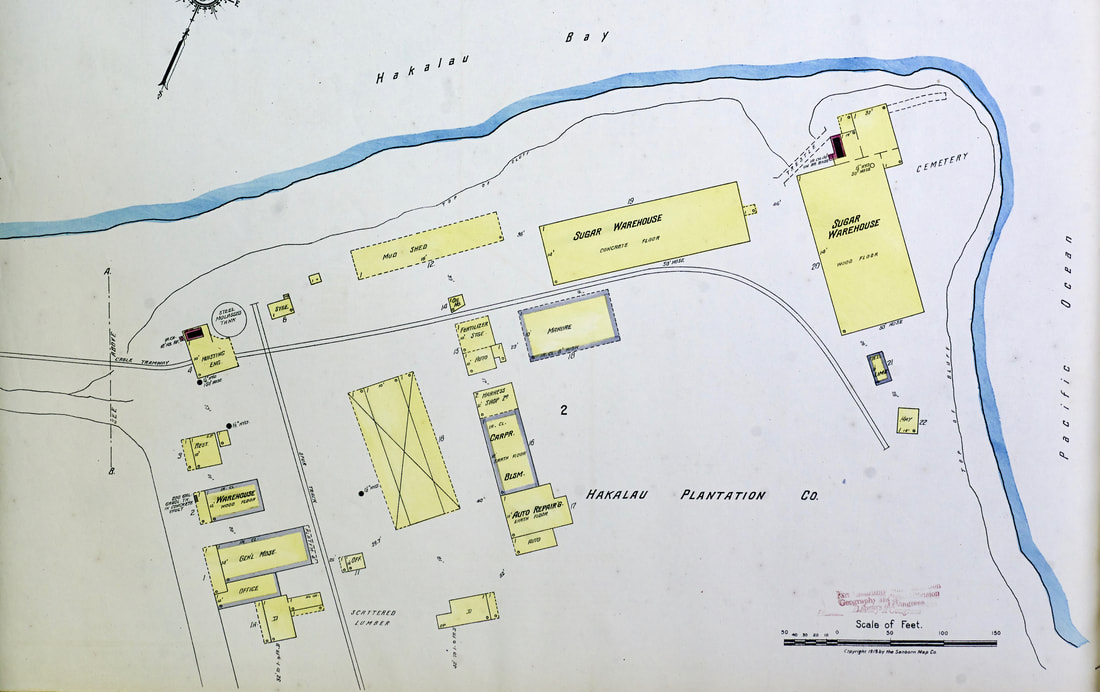 Sugar Mill and Cannery Map of the Territory of Hawaii, Map 25 [portion} Hakalau Sugar Plantation, 1919, University of Hawaii-Manoa Special Collections.
1920
Transport of sugar by train began October 1, 1920. To accommodate the shift away from ship to railroad transport of sugar, two concrete reinforced warehouses were built in 1920 adjacent to the railroad tracks. 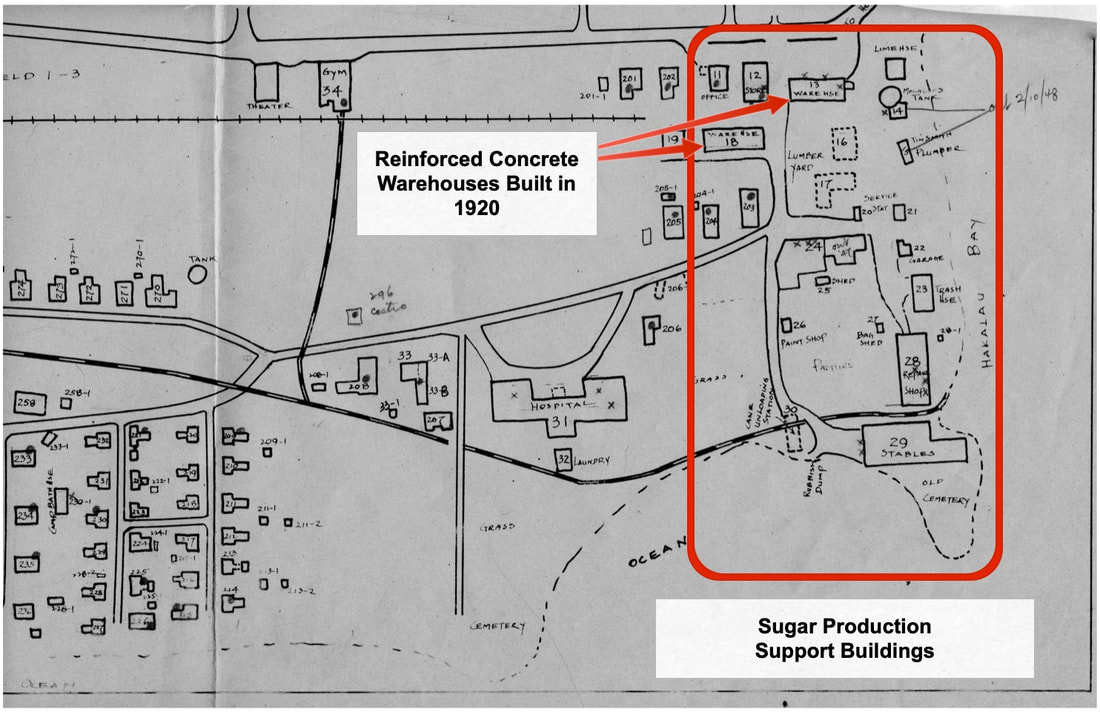 Hand-drawn 1947 Plantation Map of a portion Hakalau Lower Camp showing the sugar production support buildings, including the two concrete warehouses built to support railroad transportation of sugar to the Port of Hilo.
Not all buildings are described in newspaper articles! Fortunately, the hand-drawn map from 1947 above shows the sugar production buildings of Hakalau Lower Camp, identifying them by building number corresponding to the inventory of buildings owned by the plantation. 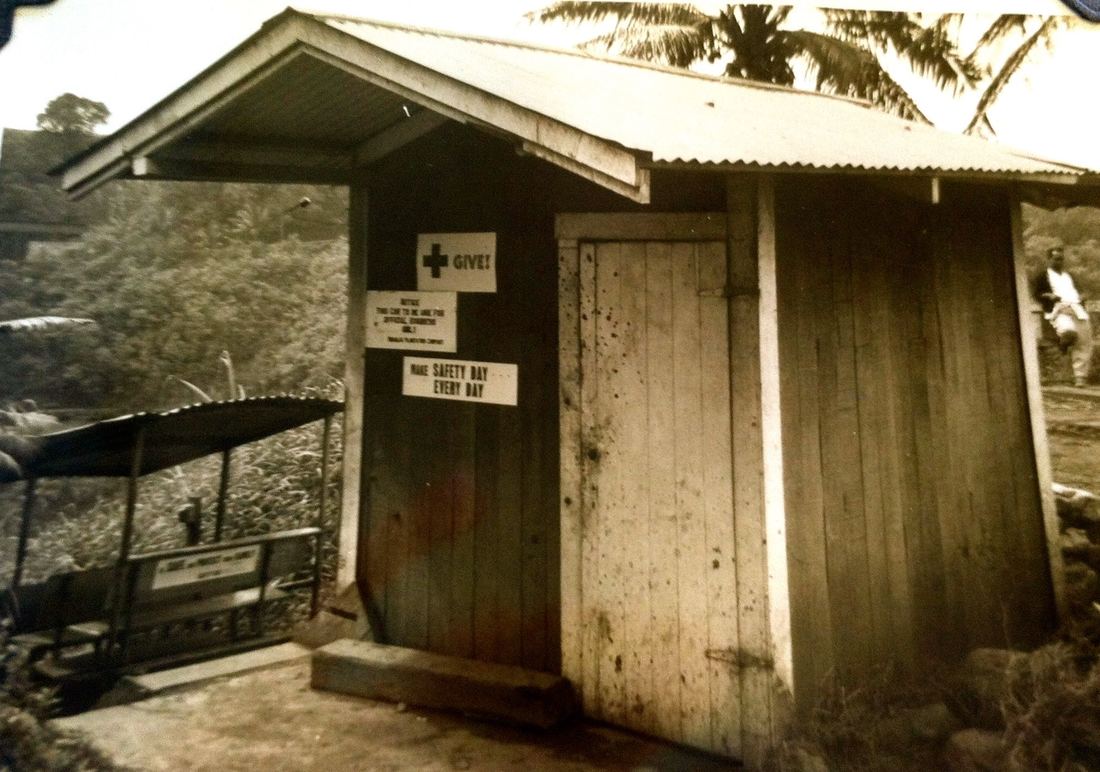 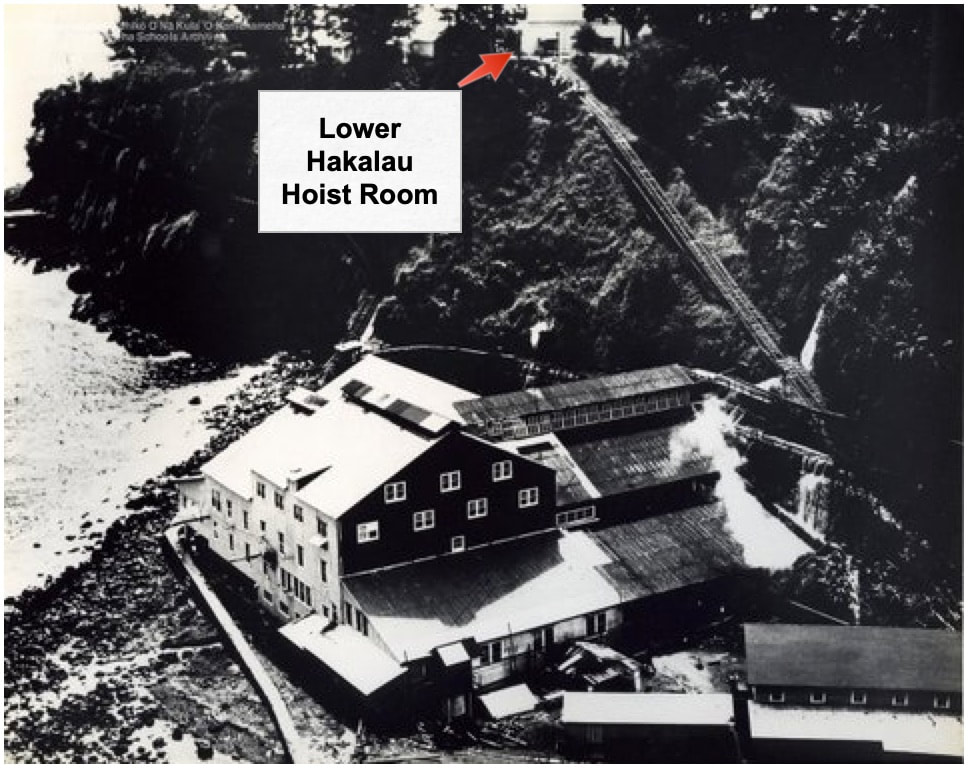 Pre-1946 picture of the Hakalau Mill, the trolley track and, at the top, the Lower Hakalau Hoist Room. 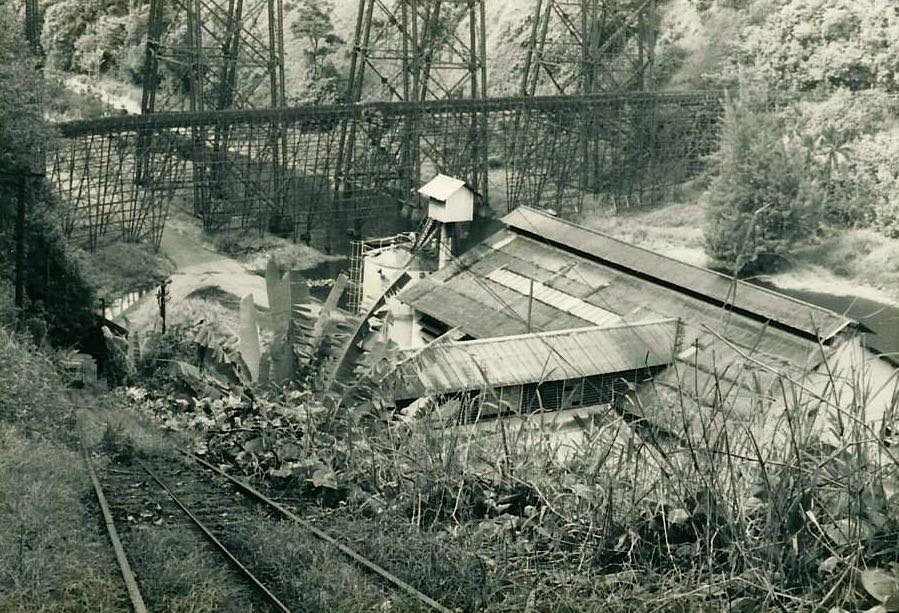 Hakalau Trolley tracks, photo from the Waichi Ouye Collection, courtesy of his family.

Hawaii Tribune Herald, August 20, 1945, accessed via Newspapers.com
Trolley pictures circa 1947, courtesy of Akiko Masuda, photographer unknown. Please contact us if you can identify the individuals in the photos as well as the photographer so we can acknowledge them in the captions. 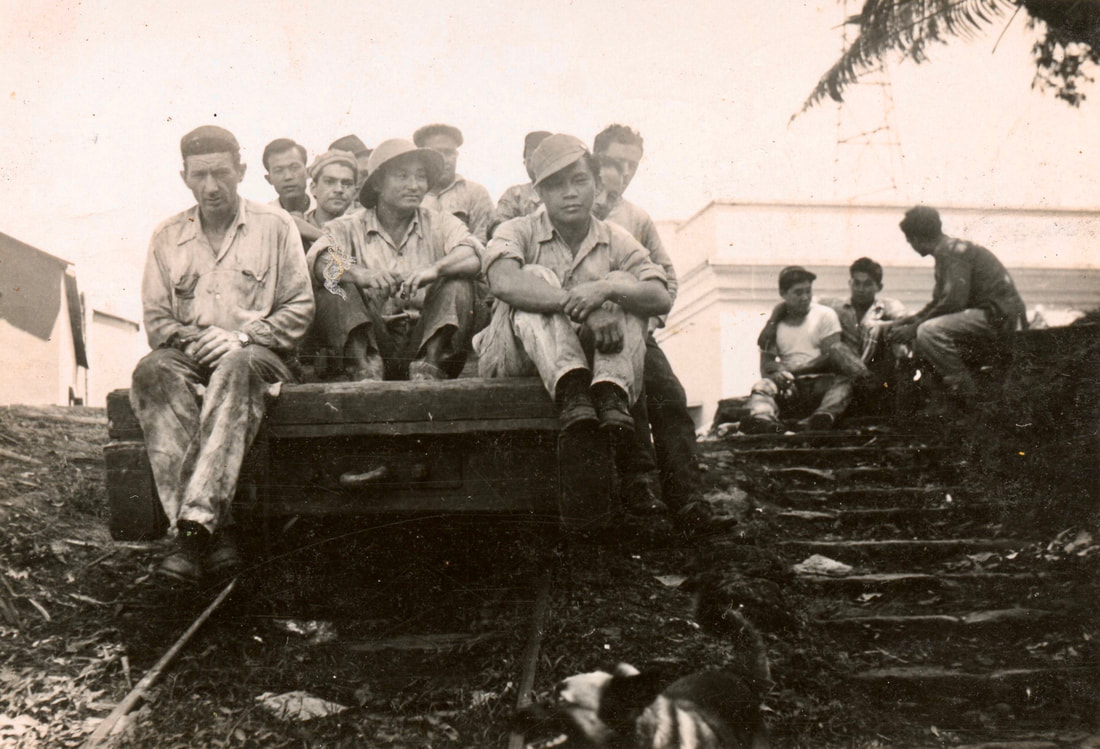 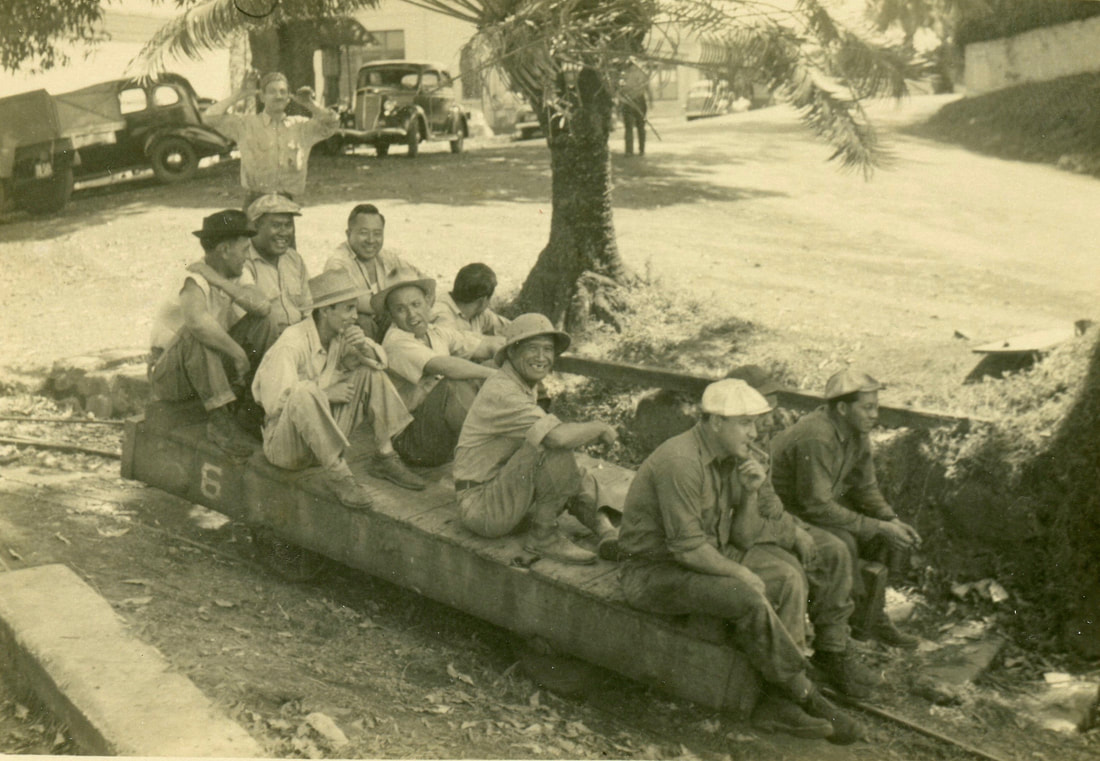 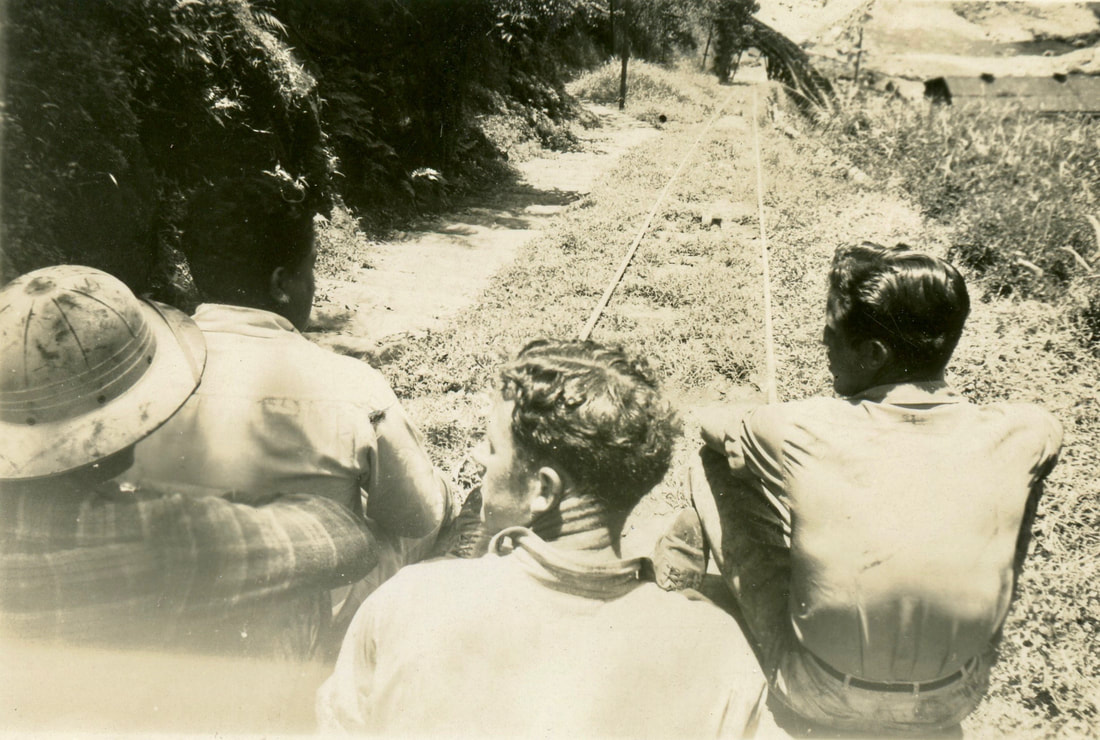 Emi Uemura, who grew up in Hakalau Upper Camp during the 1940s and 1950s recalls:

I remember riding the trolley and got scolding by the workers. We used to catch the ride going up the hill 'cause walking the stairs was very tiresome. The steps were very steep to climb. 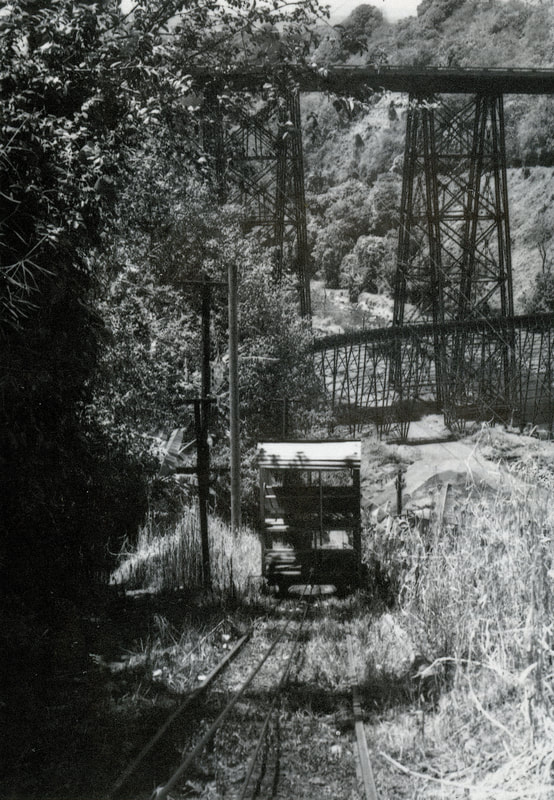 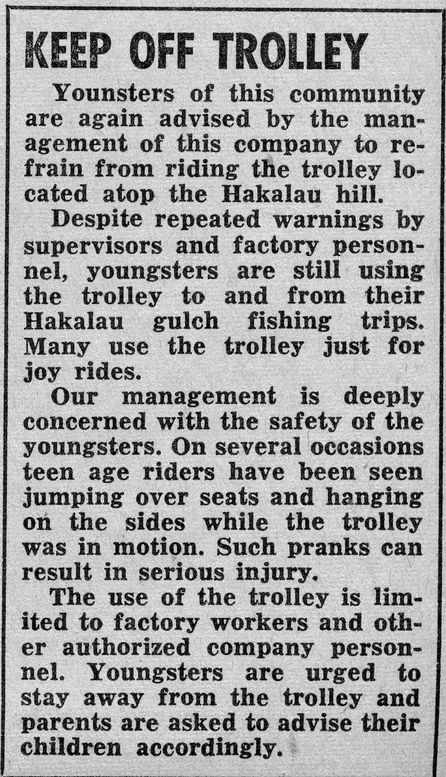 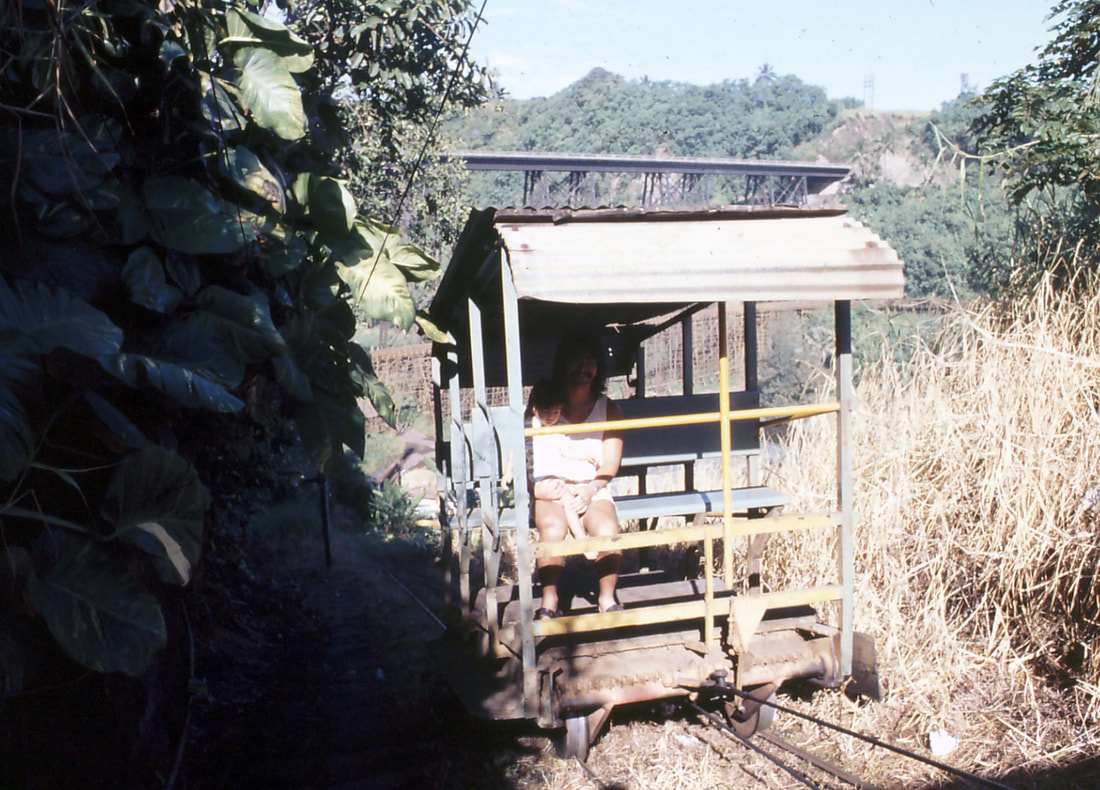 Trolley and passenger in 1972. Photo courtesy of Cal Motoda.