The demand for Hakalau-area homesteading

Hilo Tribune, Tuesday,  November 21, 1905
The first big parcel of land to become available in the Hakalau area was the so called Kaiwiki III tract, mauka of Wailea:
​The lease of this tract to the Hakalau Plantation Co. expires June 15, 1906. There are about 1,800 acres cleared and under cultivation and is regarded as a very valuable tract in the very heart of the plantation, for which it has been paying an annual rental of $300.

At the same time, a smaller tract in the Umamua area called Peleau (625 acres) also became available. A few years later, in 1912, a drawing was held for 41 lots comprising the Hakalau Iki tract (Hilo side of Chin Chuck Road). And more acreage in areas from Umauma to Ninole became available in the period before Wailea Milling Co.-tracts called Lepoloa-Kuniho, Piha, Kahuku, Waikamalo. When the time came in 1919, homesteaders in all of these tracts would be contracting with Wailea. The entire area was cane land that would otherwise have been harvested and milled by Hakalau Plantation.

Hilo Daily Tribune, Tuesday, August 14, 1906
Japanese could not participate at this time, but that was soon to change. “Japanese May Not Homestead: No Japanese can acquire public land in this Territory. The decision has been arrived at by the Attorney General’s department and is embodied in an opinion handed to Land Commissioner Pratt…”
Hawaii Herald, Thursday, June 13, 1907
The first homestead-seekers formed “Settlement Associations”, as allowed by the rules. Representatives of the association were chosen to communicate and negotiate with the Land Commissioner. Most in the news was about the Osorio Association. Its members applied for the first 14 lots of the Kaiwiki III tract. All were Portuguese except for a Mr. Kapfenburg, though his wife was Portuguese. Based on information from other sources, most came from Honomu, Pepeekeo and Hilo as well as a few from Hakalau.
Hilo Daily Tribune, Tuesday, July 23, 1907
A second big group of about 20, apparently unrelated to a settlement association, took Kaiwiki III lots at around the same time. Mostly Portuguese, this group also included a few naturalized Scots, including John Fraser, assistant bookkeeper at Hakalau Plantation, William Ross, Manager of the Hakalau Plantation Store and a cousin of John Ross, the plantation manager; and a couple of Hawaiians. 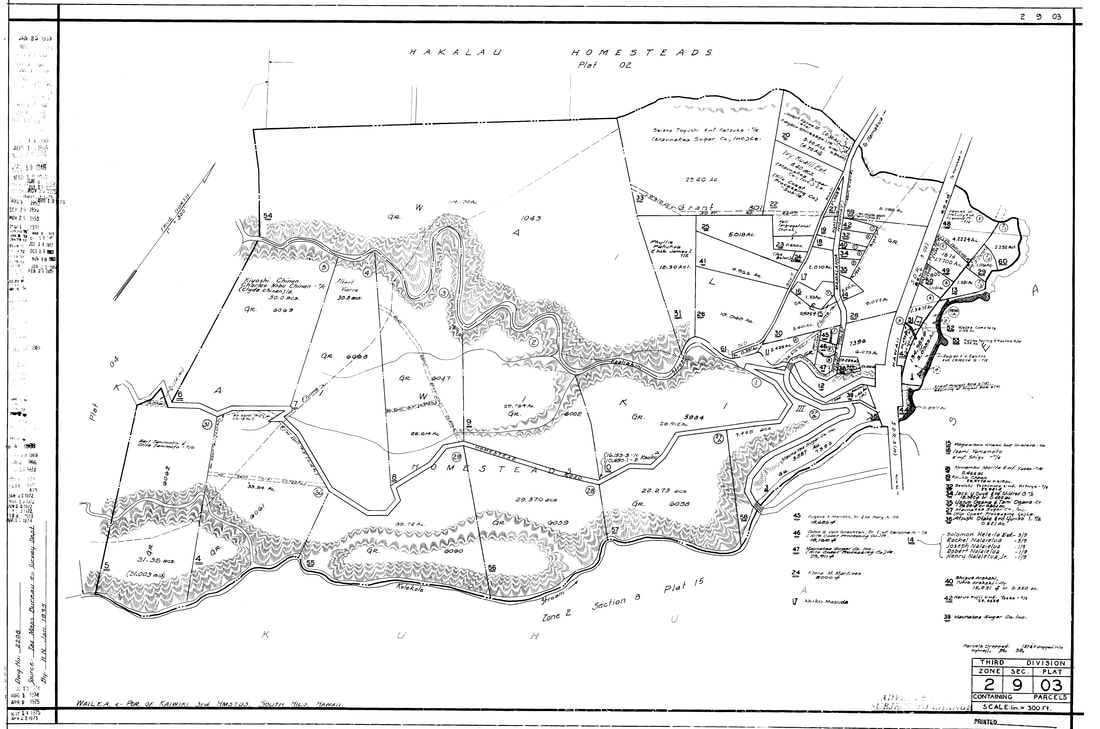 The Next Big Group of Homestead-seekers: Hakalau Iki 1912

Hakalau Plantation’s lease on the acreage of Hakalau Iki expired in 1912. The diﬀerence with this group is mainly their ethnic makeup: 10 Portuguese, 8 Hawaiian and part Hawaiian, 4 Japanese, 3 “White”, 1 Puerto Rican. So the Japanese, later to be prominent in forming the Wailea Milling Co., were starting to acquire homestead lands. 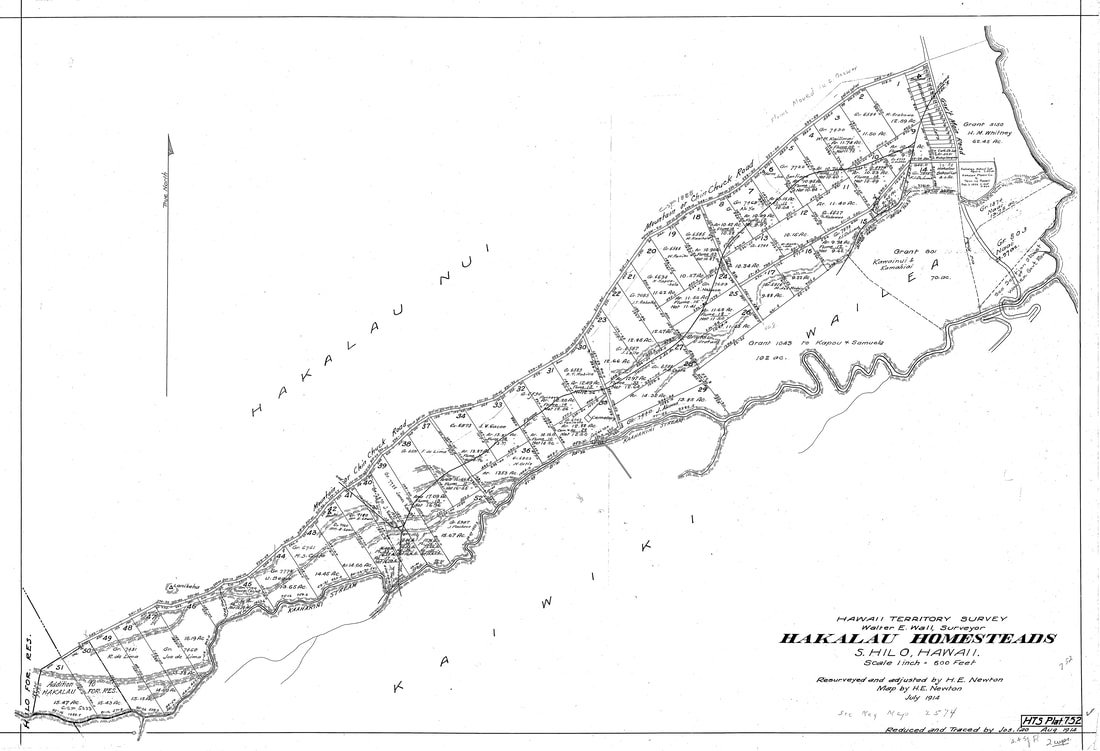 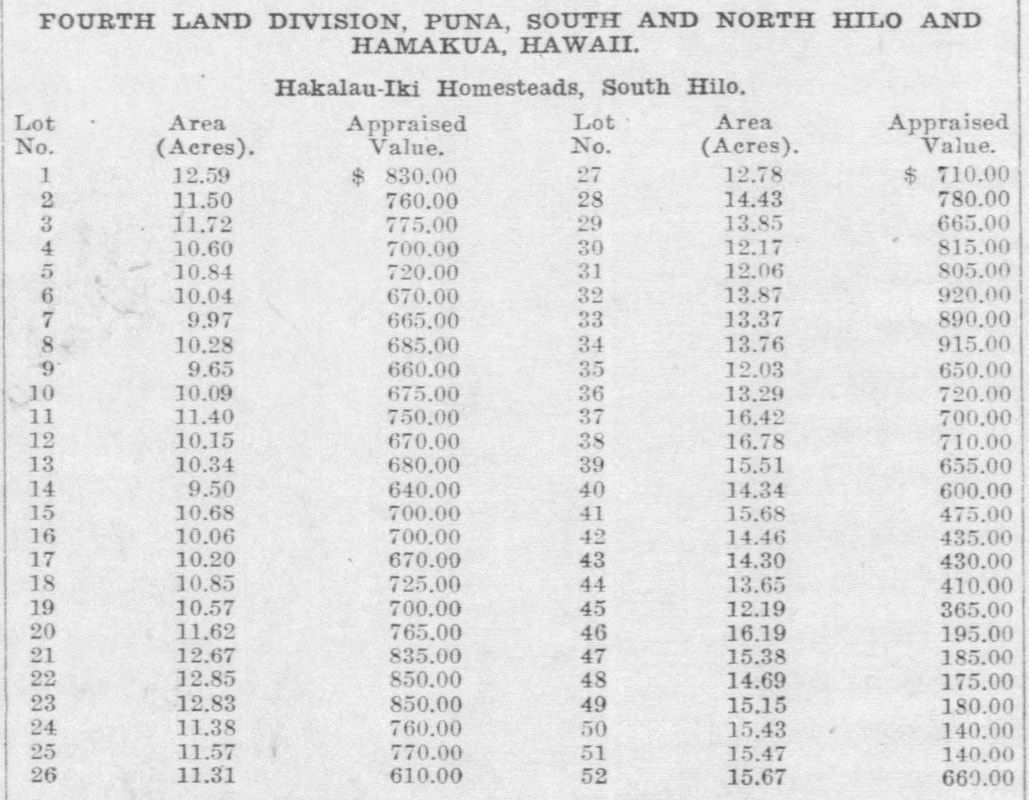