The Hakalau Neighborhood Watch is growing. Observation and communication systems are developing and lessons learned are shared. Information about suspicious activities and individuals are shared. Hakalau residents are aware and observant.

November 7, 2019
​Vehicle break-in and damage
​Kaiwiki Homestead
Our renters' vehicles got broken into over night.  We just found out this morning and HPD is arriving, as we speak.
I am on Oahu today, so I haven't seen the damage in person, but I heard they pried open the doors and made some serious damages to both vehicles that were parked INSIDE our gate.
We are not sure if this is happening in Hakalau recently or not, but wanted to alert everyone in this neighborhood.  Our safe neighborhood does not seem so safe any more.

A Senior member of our community was called by an automated call stating they were from the Social Security and their ID # was compromised.  The recorded line stated Police are coming to put you in jail or press one to avoid going to jail.  The senior pushed one and a local person came on the phone convincing the senior to pay $14,000 so she would not get arrested.  The person on the phone got all her personal information from her to include her address.  The person on the phone arranged and sent a taxi to pick her up and take her to the bank to withdraw the funds from her account.  The Taxi showed up at the Seniors house.  Fortunately, the Senior called a family member and told her a taxi was coming to get her so she could pay a bill.  The Family Member called a friend who came over and caught the taxi at the house.  She called the police and the taxi was sent off.

I called the taxi personally and asked him what was going on and why would he do such a thing.  The driver stated he was called and someone on the other end of the phone made an appointment for pickup with the Seniors name, address and directions to the house. The order was to pick up the senior, go to the bank and the take the Senior back home.  He stated he had no idea it was a scam or he was involved in any way and wanted to cooperate with the police.  The Police will handle it from here as he has the number that called him to put in the order.

I tell you this as crime is around us.  This is a syndicate that has local arms….. even on the Big Island……even in Hakalau!
June 18, 2019
Suspicious activity
Hakalau

Description of Suspect:
A white man in early 20’s and a dark colored woman in her early 20’s.
Their car is silver Hyndai car, probably compact car, possibly Veloster but not certain. The license number: ZCN795

Describe Event:
As I came home in my friend’s car I saw a car parked on the side of the driveway close to a mango tree.  A man was standing close to one large mango tree, and a woman was close to another mango tree. They looked like they were there to pick mangos. My fried shouted to them, “That’s not cool!” I also told them, “You need to ask for permission to do that.” They did not respond and walked into their car. As my friend and I pulled over in the driveway we walked over to check their license number. They left.

There was something very off about them. It didn’t feel like their real intention was to pick mangos but to case the neighborhood. The timing of them showing up coincides with our neighborhood FoodShare hours.

I called non-emergency number to report the activity and their license number. They searched the number and found that it is a rental car. But they sure did not look or act like tourists at all. Officer Castillo came to get the detail at 5:35pm. After explaining the detail I asked him to document it.
June 18, 2019
Burgler arrested and charged
Kaiwiki Homestead
February 19, 2019
Suspicious Activity
Wailea

I saw a young couple in a car all day on Tuesday 2/12 at Wailea Park at the bottom of Kulaiwi Rd. and took the license plate number.  I left for a work (USDA) meeting in Hilo that day at 9:30 am and saw them parked at the park. When I returned at 12:45 pm they were still there.  Later that afternoon, I saw the guy walk up to the [the drug house].  They were a young couple probably in their 30s.  The guy was Caucasian with short dark facial hair.  The car was a light compact HWG 035.
February 18, 2019
Attempted Child Abduction
Kaiwiki Homestead

​On Monday, February 18 a child of 2 was almost abducted on a Kaiwiki Homestead property by a couple who were trespassing. The mother was in the house gathering items to take to Hilo while the little one was playing in the macadamia orchard. When she went to check a woman was carrying her child off and the mother screamed. The man ran (he has a limp) and the women put the child down and hurried off as well. The woman is in her 30’s, white, brown hair in a bun, gold hoop earrings and a red jacket. The mother was going to the police station to look at photos and try to identify the couple.
February 2, 2019
Closure of Drug House through an Order of Abatement
​Wailea 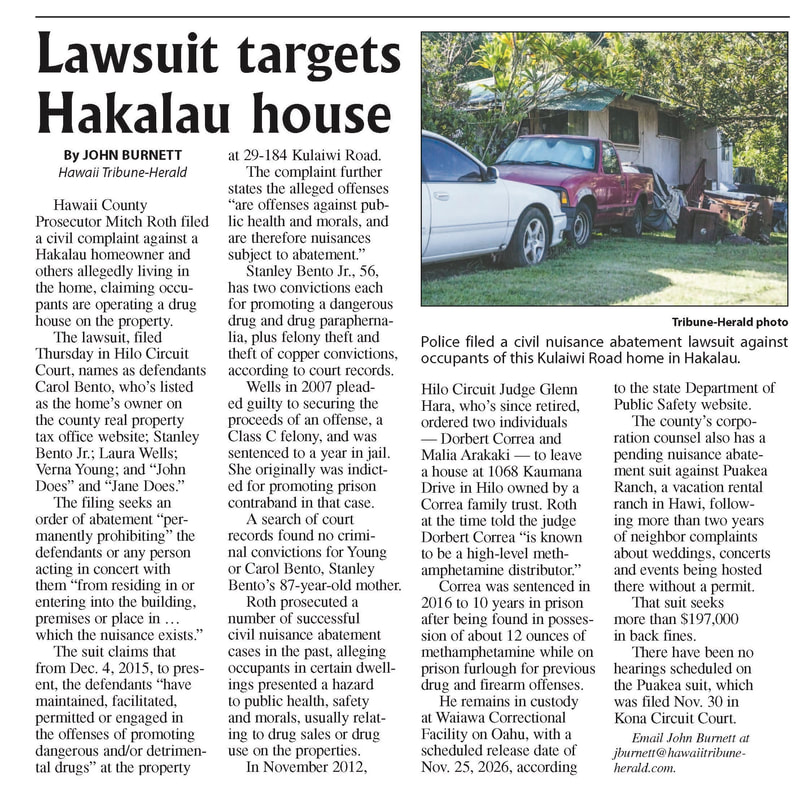 We have been having issues with someone stealing from our property for the past 6 months.  Plants, chickens, fruit, water hose......We finally caught the thief on Tuesday @~5:00pm (1/29/2019). I let her go with an warning... Not sure if this was the correct decision. I'm sure she has been stealing from a lot of other people in the area.